The Associated Alumni Outstanding Young Alumni Award recognizes Acadia alumni who have graduated within the past 10 years whose endeavours in professional research, athletics, the arts, the community or other areas worthy of recognition bring honour to Acadia University.

Paul is an assistant coach with the Toronto Maple Leafs’ organization in the National Hockey League. He graduated from Acadia with a BBA in 2010 and worked previously as an accountant and teacher. He was named assistant coach of the OHL’s Oshawa Generals in 2012 and the rest is history.

McFarland played four seasons in the OHL, recording 113 points (50-63-113) in 246 games between the Kitchener Rangers (2002-04) and Windsor Spitfires (2005-06). The left-winger won an OHL Championship and Memorial Cup Championship with Kitchener in 2003 and in his final season with Windsor, he served as captain. Following his OHL career, McFarland played four seasons for Acadia University and was captain for three (2007-10).

A leader on and off the ice, McFarland is a three-time Academic All-Canadian, S.M.I.L.E. volunteer and was twice named Acadia University’s Male Citizen of the Year. The Paul McFarland Award, established in 2010 and named in his honour, recognizes the combination of athletics, academics and community involvement at Acadia.

McFarland’s wife Kelly is also an Acadia graduate, having earned a BA in 2008 and Bachelor of Education in 2010. They have two sons, Cooper and Keaton.

Heather MacDonald (’09) is the Executive Director of the MacPhee Centre for Creative Learning, a charity and community hub located in Dartmouth with the mission of empowering youth ages 12-19 to access their individual creativity and a path to success. MacDonald brings a multidisciplinary approach to her work, having worked in training, facilitation and program development for organizations such as Junior Achievement, YMCA and Scouts Canada. During the course of her career, she has partnered with corporate organizations, governments, non-profit organizations and small businesses to build relationships to improve the well-being of communities. MacDonald’s deeply rooted passion for service leadership, her work ethic and her desire to help others comes from growing up in an entrepreneurial family in rural Nova Scotia. As a youth herself, MacDonald participated in music and theatre programs that have shaped who she is today. She has a Recreation Management degree from Acadia with minor in Business. She spent her first two years at Acadia in the School of Music. In 2015, she graduated from the Executive MBA program at Saint Mary’s University and was selected to participate in the 21Leaders for the 21st Century Program. MacDonald is also an active volunteer with Scotiabank Bluenose Marathon and DASC – Dartmouth Adult Services Centre. Her love for lifelong learning reflects a determination to help youth and communities succeed. 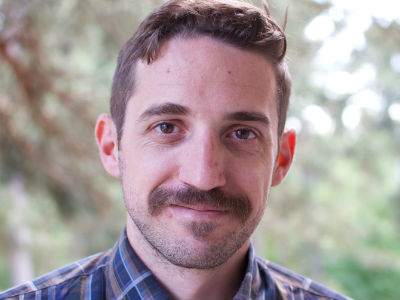 Dr. Aaron Shafer graduated from Acadia University in 2007 with an MSc in Biology. A distinguished scholar and researcher, Dr. Shafer published eight peer-reviewed papers while still a graduate student at Acadia. Biology professor and mentor Dr. Don Stewart said of Dr. Shafer that “he was the most outstanding student that I have had in nearly 20 years of teaching, and his record of successes after leaving Acadia highlights how exceptional an academic he is.” Dr. Shafer completed a PhD at the University of Alberta in 2012, and his thesis was selected in 2013 by the Canadian Association of Graduate Studies as the best PhD thesis in Canada in the fields of science, medicine and engineering. He has received the prestigious Banting Postdoctoral Fellowship (valued at $70,000 per year for two years) and after a successful stint at Upsala University in Sweden, Dr. Shafer is now an Assistant Professor at Trent University in Peterborough, ON. He is deeply committed to his profession and his students, and is a strong advocate of scientific endeavour among youth in Canada, learned societies and stakeholder groups nationwide.

Leslie Lewis (’10) is the 2017 recipient of the Associated Alumni of Acadia University’s Young Alumni Award. An outstanding student, Leslie was named Acadia’s Student of the Year and earned the Frank H. Sobey Award for Business Excellence in her graduating year. Since then, she has forged a successful career in finance and investment, working in Toronto first with CIBC and later the Ontario Teachers’ Pension Plan, and then serving as International Finance and Trade Policy Advisor to former federal finance minister Joe Oliver in Ottawa. Currently, Leslie is an associate with Onex Partners in Toronto, making investment recommendations to senior members to acquire billion-dollar businesses. Ever mindful of community, she has a strong commitment to volunteerism, serving as an Action Canada Fellow addressing hunger in the Arctic in 2013-14 and with Rise Asset Development as an Investment Committee Member (2012-15) providing start-up financing and business plan analysis to entrepreneurs who have overcome mental illness. The Young Alumni Award was presented to Leslie at the annual Social on the Hill in Ottawa on November 28, 2016. 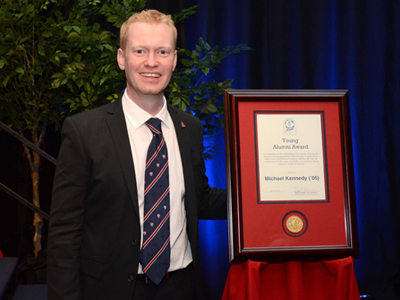 Mr. Kennedy graduated from Acadia with a BBA in 2005. He went on to complete a MPACC at the University of Saskatchewan and achieved his CA designation in 2008. Mike’s career has covered a wide spectrum of business, volunteerism, entrepreneurship and social activism. He is the Co-Founder of Awesome Halifax and launched the Canadian Bacon Cookhouse and H20 Golf. Mike has received numerous awards and acknowledgments, including Nova Scotia’s CA of the year in 2010 and the Halifax Chamber of Commerce Person of the Year award in 2014. He is a community volunteer extraordinaire contributing to Canadian Blood Services, East Coast Music Association, ALS Nova Scotia and the Brain Tumour Foundation of Canada. 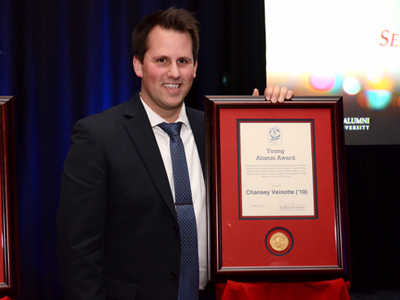 Mr. Veinotte graduated from Acadia University with a BScH in Biology in 2010. Two years later he completed a Master’s of Science at Dalhousie University. Chansey is currently a Teaching Assistant in two Biology courses at Dalhousie: he is a Senior Instructor for the Prep 101 Biology Course and is the Laboratory Manager and Research Associate at the IWK Health Centre, Dalhousie University. Since graduating from Acadia, Chansey has received several academic awards and co-authored numerous papers. His work in medical research has been recognized far and wide. In addition to all of this, Mr. Veinotte volunteers his time with health education in the public school system and is the founding member of Duathlon of Champions. In his spare time, Chansey is a musician and enjoys sailing.