Dr. Hans-Otto Pörtner was recognized with an honorary Doctor of Science from Acadia University for his scholarly leadership in the impacts of climate change during a luncheon held on October 7, 2022, in the Clark Commons. The small ceremony culminated his campus visit to deliver the inaugural Dr. Fred Gilbert Lecture Series.

Unable to attend the in-person May 2022 Convocation ceremonies, Dr. Pörtner welcomed the opportunity to meet with students, faculty, staff, and alumni during his stay in Wolfville and says he is honoured to be recognized by Acadia.

“There are multiple challenges for us living on this planet,” he says in his Convocation message to students, citing climate change and biodiversity loss as critical issues. “The future will take us into a situation where we cannot take things for granted anymore… We need the brightest minds on the planet joining and helping to solve these issues.”

Dr. Hans-Otto Pörtner is co-chair of the Intergovernmental Panel in Climate Change (IPCC) Working Group II, which assesses the vulnerability of socio-economic and natural systems to climate change, negative and positive consequences of climate change and options for adapting to it.

An internationally respected biologist, Dr. Pörtner is known for his expertise on climate change and related physiology of marine animals. He has made considerable contributions, through his work with the IPCC, to our understanding that the effects of climate change are becoming increasingly severe and irreversible.

His work lays the foundation for setting long-term climate change targets for the United Nations Framework Convention on Climate Change (UNFCCC) and its Conference of the Parties (COP) negotiation process. Dr. Pörtner’s early-career experience at Acadia influenced his research and connects him to Nova Scotia.

Dr. Pörtner studied at Münster and Düsseldorf Universities, where he received his PhD and habilitated in Animal Physiology. As a Research and then Heisenberg Fellow of the German Research Council, he worked at Dalhousie and Acadia universities and at the Lovelace Medical Foundation in Albuquerque, New Mexico.

The Dr. Fred Gilbert Lecture Series is presented by the Acadia Alumni Association. It pays tribute to the work of Dr. Gilbert (’65), celebrating his academic and scholarly contributions to Canada’s post-secondary sector as former President of Lakehead University and Director on the Acadia Alumni Board. 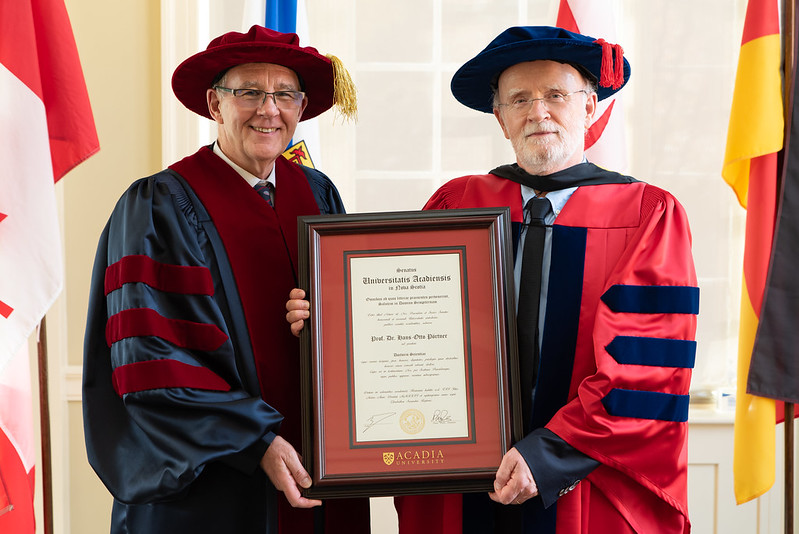