When Dr. Peir Pufahl studies rocks that have accumulated across the entire geological time scale stretching back 3.5 billion years, his work touches the life of your local farmer. Dr. Pufahl, professor of Sedimentary Geology in Acadia University’s Earth and Environmental Science Department, bridges the gap between science and industry with research that aims to improve global food security.

His international collaborations in Brazil, Australia, the UK, and the US also bring opportunities to Acadia undergraduate and graduate students. “It’s important to me that, once students leave my research group, they’ll be able to compete on the international stage,” he says. 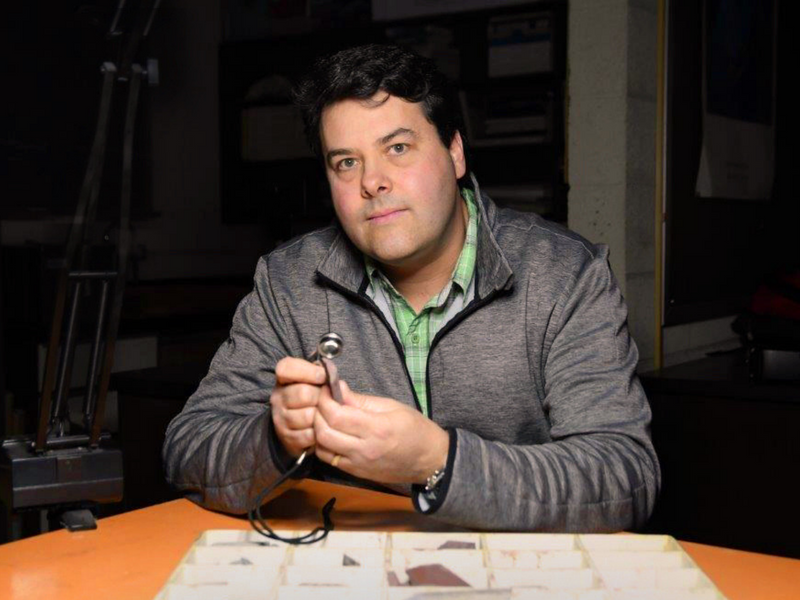 As Canada’s only specialist in phosphorite – a sedimentary rock containing a high proportion of calcium phosphate – Dr. Pufahl is an international leader in phosphorite research. He is the sole international advisor to the Geological Survey in Brazil, where he has developed a federally funded initiative to try to find more phosphatic fertilizer deposits and so help Brazil feed its growing population of 200 million. He has done similar work in Western Australia.

“My research focuses on bioelemental sedimentary rocks,” he says. “From a scientific standpoint, these rocks are important because the precipitates of nutrient elements like phosphorus and iron are important for all living things. Phosphorus is required for energy conversion in cells – it’s the backbone of DNA. Iron is a building block of many proteins, and plants need iron to photosynthesize.”

By studying rocks through geological time, Dr. Pufahl seeks to better understand how the Earth’s system evolved. “When did oxygen evolve on Earth? How did the oceans change through time? What ramifications do these changes have for the evolution of life? We look at rocks from Precambrian times to the present to try to understand how phosphorus and iron have cycled throughout Earth’s history and given rise to the life we see today,” he says.

Dr. Pufahl works with colleagues worldwide to develop new exploration models specifically for phosphorus. “It’s satisfying to be able to work with industry to help them find more of these non-renewable resources,” he says. “My research and my research lab stand to make a real contribution in delineating not just Nova Scotia reserves for phosphorus but the Canadian phosphate reserve base, which is among the least known and understood in the industrialized world. Almost all our phosphorus is imported, much of it from countries in North Africa and the Middle East that have significant political unrest.”

Globally, phosphates have been described as “the gravest resource shortage you’ve never heard of,” Dr. Pufahl points out. “When you look at the Earth’s burgeoning population, it might be in the next 30 to 100 years that this really does threaten global food security if we don’t find more deposits.”

Dr. Pufahl is the only phosphate researcher who looks at phosphorus deposits scientifically and industrially in Canada.

From around the world, PhDs, master’s students, post-doctoral fellows, and research associates come to Acadia to work in Dr. Pufahl’s lab. “We’re attracting the very best in the world,” he says. “By focusing on building these international collaborations and going after research money, we bring a tremendous amount of opportunity to everybody.” That strengthens the University and propels it down new and exciting pathways, he adds.

“We’re doing top-tier science at the international level,” he says. “We’re competing on the international stage. And that’s exceptionally important, because that’s how you build momentum to foster more collaborations, as we’ve been able to do over the years.”

Alongside Acadia’s global reach, Dr. Pufahl sees its local influence as invaluable. “We’re talking about developing phosphatic fertilizers in such a way that will directly benefit Nova Scotia agriculture,” he says. “Acadia lies in the agricultural heartland of Nova Scotia. That link to the local community, to Nova Scotia and to this region sets Acadia apart.”

Dr. Pufahl expresses gratitude to Acadia and his colleagues for the opportunity to do his research.

“Without that kind of support and understanding of what people are capable of, none of this is possible,” he says. “To have had the opportunity to do what colleagues at some large universities haven’t had the chance to pursue is incredible. Acadia is a special place.”

Dr. Pufahl has been nominated for a 2016 Nova Scotia Discovery Award, Professional of Distinction. The award recognizes an individual who is a leading innovator and a role model for people who choose science as a career.