Pledges that Acadia will be true to its traditions and values, will continue to develop as a truly global university, and will be a force for improving the common good of humankind in Canada and around the world

Today, Chancellor Libby Burnham (’60) officiated at the Installation of Dr. Peter J. Ricketts as 16th President and Vice-Chancellor of Acadia University. The ceremony took place at the Manning Memorial Chapel and was attended by almost 200 guests representing campus, community and universities from across Canada, including Chancellor Emeritus Arthur L. Irving.

“I am enormously grateful to the Board of Governors and to Acadia University for bestowing upon me the great honour and privilege of becoming its 16th President and Vice-Chancellor,” said Ricketts. “When I came to Canada in 1978 for a 9-month lectureship at the University of Windsor, never intending to stay, I would never have imagined that I would be standing here today being installed as a university president.”

Ricketts began his term on July 1st after a yearlong search to replace outgoing president Ray Ivany who retired on June 30th of this year. The Chair of Acadia’s Board of Governors, John Rogers (’79), had the privilege of introducing the new president to Burnham for his official swearing in.

“As chair of the search committee responsible for recruiting Peter, I know we couldn’t find anyone better suited for Acadia,” said Rogers. “His commitment to student success, his broad experience in post-secondary education from coast to coast in Canada, and his scholarly work in coastal ecosystems make him an ideal fit. He understands Acadia’s campus community, our important role in Nova Scotia’s economy, and our network of stakeholders and supporters including our alumni worldwide.”

During his remarks, Ricketts took time to acknowledge the importance of Acadia’s history and traditions. “As I have explored the incredible university, I see an institution that is steeped in history and tradition and yet is engaged in the leading edge of modernity through the teaching and research which constitute the core of its educational mission,” he said. “Acadia has not only embraced change but it is actually leading change: it is truly a university of the 21st century, yet we have also held dear those traditions and values that have given us our own unique culture and character, that define us as a university, and that make Acadia so special.”

Speaking before the ceremony, Burnham welcomed Ricketts to the Acadia family on behalf of students, faculty, staff, and alumni.

“It is such a pleasure, both as Chancellor of Acadia and a proud alumna, to welcome Dr. Ricketts to the Acadia family,” said Burnham. “With this weekend’s Homecoming celebrations, it is such a special time on campus and what better a way to start the weekend than by installing our new president and marking an important milestone in Acadia’s history.”

Following the installation ceremony, a reception was held at the Sheldon L. Fountain Learning Commons, kicking off official events for Acadia’s Homecoming Weekend. During Ricketts’ first Homecoming at Acadia he will be taking part in a number of events across campus including the Sports Hall of Fame Induction Ceremony and performing the ceremonial kick-off for Saturday afternoon’s football game. For the full Homecoming schedule click here.

View photos of the event on our Flickr photostream: 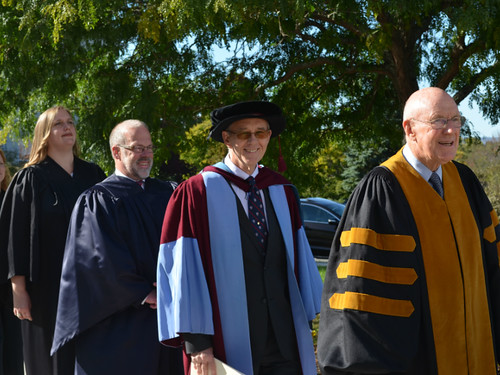