What is the Dodge Cup hockey game, and how did it raise $4,000 and 14 Bankers boxes full of food for the Wolfville Area Food Bank last month?

The story began 20 years ago when four Kinesiology students teamed up to create a community initiative in their fourth-year Senior Seminar class. Taught by Ann Dodge (’91) then and now, it is the only fourth-year core course in the Kinesiology program. “The students are charged with creating an initiative to help in the wider community, to give back to the community in which they’ve spent the last three or four years,” Dodge says.

In 2003, Geoff Yates (’04), along with classmates Jen Clarke (’04), David Kontzie (’05), and Ryan Marrast (’05), decided to run a charity hockey game between the Schools of Kinesiology and Business as their community initiative.

“We were all athletes, and planning a sporting event was right up our alley,” Yates says. “We raised around $2,000 that first year for a large family impacted by poverty. And now the money goes to the food bank, which is important for the community.”

The game has been played every year except 2020, when the COVID-19 pandemic curtailed in-person events. But even then, the Dodge Cup raised money for the food bank. When Yates heard the game had been cancelled, he stepped in and made Facebook connections to gather donations online. “That year, as much money was raised for the food bank as it was with many in-person games,” Dodge says. 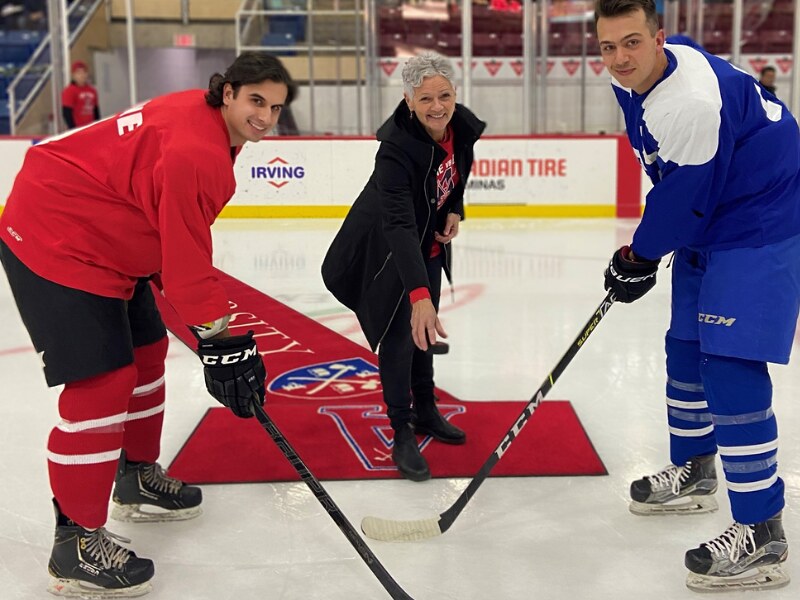 While Dodge is understandably proud of what the organizing group did this year, she also points to the impact and importance of other community initiatives that are not such a high profile or tied to financial goals. “The Sensory Motor Instructional Leadership Experience program (S.M.I.L.E.) has been the recipient of a couple of those initiatives this year, as have Chrysalis House and the Acadia Food Cupboard for students in need,” she says. “Students cleaned up the campus after Homecoming, and a group went over to the Wickwire Place seniors’ residence and had an amazing day of activities and talking with the residents there. The community initiatives are wide and diverse.”

For this year’s hockey game, held November 24, one of the organizers was Cassidy d’Entremont (’23). “In terms of the money raised and the food collected, we almost tripled the previous record,” she says. “But besides what we raised for charity, we learned to work as a team. We started in September and had to learn how to work together and understand how different personality types work together. I’m grateful for that experience.”

To help celebrate the game’s 20th anniversary, d’Entremont persuaded Yates to record an audio message of welcome that was played at the start of the game. For his part, Yates remains modest about his involvement. “I was 25 per cent of the original team, and I’ve had nothing to do with it since, except for 2020, when I helped do a little bit of online fundraising. It’s the spirit of Ann and her classes that have kept it going.”

So, who won this year’s game?

It was close, with a final score of 3-2. As in most years, the Manning School of Business Administration team won. “It was a good game,” says Darren Kruisselbrink, Director of the School of Kinesiology. “The atmosphere was electric. They had cheer-offs at different times, and both sides were enthusiastic. It was a really fun atmosphere to be in.”

The game is also important to the School of Business, says its Director, Paul Callaghan. “Although Kinesiology started the Dodge Cup, it has also become a big tradition within Business. In terms of school spirit, it’s one of the highlights of the year. So, we very much appreciate the efforts of the Kinesiology students to plan, promote and host the event every year. And, of course, having the game named for Ann Dodge is a well-deserved honour.  Ann is a tremendous mentor for her students and a highly respected member of Acadia’s faculty.”

Kruisselbrink likes that the game’s focus is now on its broader purpose of raising money for good causes such as the food bank. “Coming out of COVID, we have realized how important it is to be connected with people in our community,” he says. “When you have an event that creates such a bond within the campus community and extends beyond campus to help our local community, that’s worth tooting our horn about.”

The Acadia Food Security Project is an ongoing campaign to bolster student food resources and to help ensure no students fall through the cracks in obtaining nutritious food that supports health, wellness, and learning. All funds go toward enhancing the related programs and resources and Acadia’s ongoing efforts to create and maintain a food-secure community on campus. You can donate at giving.acadiau.ca/foodsecurity or reach out to a representative of the Office of Advancement at advancement@acadiau.ca or (866) 222-3428 to donate by phone or send a cheque by mail.

Lesley Frank (’95), Professor of Sociology, is Acadia’s Tier II Canada Research Chair in Food, Health, and Social Justice. In her research, she addresses early childhood food insecurity. On the heels of World Children’s Day (November 20), the Social Sciences and Humanities Research Council (SSHRC) is featuring her work. Dr. Frank’s profile can be found on the SSHRC website. You can also watch the trailer for her first book, Out of Milk: Infant Food Insecurity in a Rich Nation, which the University of British Columbia Press recently published.