A degree in environmental science may not seem an obvious route to a position as a policy analyst for the Nova Scotia government.

For Matthew Baker (BSc ’12), however, the knowledge and skills he developed at Acadia University were a good match for the Sustainable and Renewable Energy Division of the Nova Scotia Department of Energy. While nearing completion of his masters of science last winter, he was hired under the provincial government’s Make It Here youth hiring initiative. 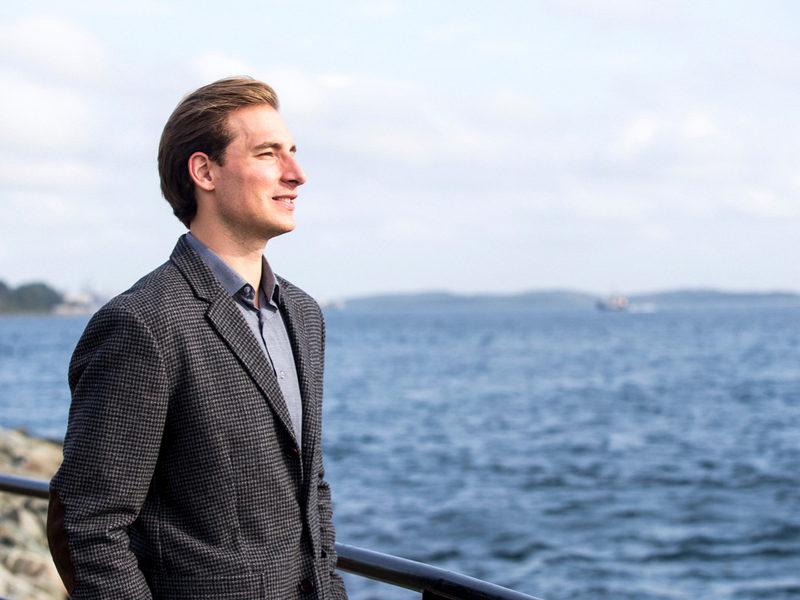 “We’re very happy with how Matthew’s been able to apply his knowledge,” says Sandra Farwell, director of the Sustainable and Renewable Energy Division. “He’s integrating his academic knowledge with technical skills and putting it into practical use for the government. His experience with Acadia has been very helpful for the work we do on tidal energy. He has a strong work ethic, and he’s very professional.”

Applying classroom skills to a career

Still an active MSc candidate, Matthew took the job with the encouragement of his thesis supervisor, Dr. Anna Redden, who is the director of the Acadia Centre for Estuarine Research and of the Acadia Tidal Energy Institute. He worked with Dr. Redden from the spring of 2011 until early 2016, first as an undergraduate and then as a graduate student.

“The majority of the work I did was in freshwater and marine environments, some of it very hands on, some of it very analytical,” he says. “I was participating in research in areas that were relevant to marine renewable energy projects in the province, specifically the upper Bay of Fundy. I worked with fishermen to conduct a research and monitoring study to collect data on fish in the Minas Basin prior to project development.”

Matthew is now part of a Department of Energy team focusing on developing in-stream tidal energy in the Bay of Fundy. “My main responsibility is working with my group on the framework to help promote the growth of this industry within the province,” he says. “We are also developing regulations to support the Province’s Marine Renewable-energy Act so development is overseen by government and happens sustainably. Our aim is for Nova Scotia to grow economically and produce energy that’s clean and efficient and reduces greenhouse gas emissions.”

Matthew chose Acadia’s Bachelor of Environmental Science program because it was broadly based. “You were exposed to all fields of science: biology, geology, chemistry, physics, math, statistics – and environmental science,” he says. “I thought that would provide me with an excellent foundation to figure out what I was most interested in and hopefully translate that into a career. The environmental science program effectively did just that.”

He praises Dr. Redden for her role in her students’ successes. “Dr. Redden is a fabulous professor and an excellent role model and facilitator for students at the undergraduate and graduate levels,” Matthew says. “She provides a ton of opportunities to get involved in unique research. She gives her students the opportunity to grow and to be exposed to research, network opportunities, and experiences that will help them develop skills that lead to interesting and rewarding careers.”

Matthew sees plenty of opportunity within the province for young graduates.

“Many students struggle to figure out how to translate their classroom skills into real-world experiences,” he says. “Acadia, its community and the experience I was given to learn and grow as a student and as an individual, coupled with the provincial government and an emerging industry like tidal energy, gave me an exciting opportunity to apply my university skills to real life.”

For Sandra Farwell, the province’s Make it Here initiative has had a positive impact on her department. “It’s brought a younger perspective into our existing team,” she says. “Matthew comes with fresh ideas, and it gives him an opportunity to grow within our division. There will be lots of opportunities for him as he learns and gains experience in our department.”

The government wants to keep young, talented people in Nova Scotia and to let them and their families know that good jobs exist here. Besides offering opportunities with the provincial government, Make it Here has a variety of programs to facilitate skills upgrades and to encourage employers to hire recent grads, mentor apprentices, and give students more opportunities to learn on the job.