This club allows students at Acadia who want to play highly competitive baseball be able to compete while attending University. Not only will players be able to achieve personal goals in terms of playing University-level baseball, but players are able to aid in the operation of the club by becoming a member of the executive, develop leadership skills in our annual Youth Baseball Camps, and learn important life skills along the way, including time management of balancing a full-time course load while playing an intensive baseball schedule.

The Acadia Axemen Baseball Team plays in the CCBA Atlantic Division which includes 6 teams from across the Maritimes. Starting in September, we play two double headers (4 games) per weekend for a total of a 16 game regular season, 2-3 weeks of playoffs, followed by a National Championship. The team trains for approximately 4-6 hours per week.

Mission: To provide an opportunity to play the most competitive University Baseball in Eastern Canada while helping players develop and grow players in their athletic and academic endeavors.

Mission: Acadia Axe-treme's mission is to provide student members with a positive environment that will support his/her needs. The club hopes to be recognized within the community of Wolfville and to become more well know across the province.

Goals: Our goal as Acadia Axe-treme is to make a positive impact on our athletes and community. Axe-treme is a well-grounded team that supports competitors, and our goal is to take our knowledge of sportsmanship and carry it with us to Nationals. We also want to ensure that every athlete is safely executing stunts and skills to their best ability and skill level.

The Acadia Equestrian team offers both a recreational and competitive opportunities for members.

The AET competes in both flat classes and jumping, with different levels giving riders of all abilities an opportunity to compete. Each rider accumulates individuals points as they place in their divisions, and the overall wining school is determined by points accumulated by each rider. At the end of the season, the League Champion title is given to the school who has accumulated the most points overall, and the Reserve Champion title is given to the school in second place.

Mission: To provide Acadia students an opportunity to meet other people with similar interests and ride horses in a recreational, instructional, and/or competitive environment regardless of experience or skill level.

Acadia RFC was established in on December 4th, 1878. In the club’s first 12 seasons Acadia RFC did not lose a single game. The first two teams in the league were Acadia and King’s College. The league later expanded to include St. Francis Xavier, Dalhousie, University of New Brunswick, and Mount Allison.

When rugby was first introduced to Acadia the sport was deemed a club team sport due to the Board of Governors opinion that rugby was ‘too violent’. Despite this in 1920 mens’ rugby at Acadia became a varsity sport and stayed that way until 1956. Acadia RFC use to play on a field that was located just outside Chipman hall until the early 1920’s when games were moved to Raymond Field. Acadia won their first championship on Raymond field in 1947, beating St. F.X 8-5.

Two of the longest games of rugby in Nova Scotia history were played between Acadia and Mount Allison in 1933 and 1936, the first lasting 100 min, in a tie, and the second lasting 112 minutes with Acadia emerging victorious. The game was so long that cars surrounded the field with there head lights on to provide light.

After the 1955-56 rugby season Mount Allison and Dalhousie discontinued their rugby programs, and subsequently switched to Canadian football. This eliminated all opposition for Acadia RFC. Rugby would not be played at Acadia until the 1970s when the club reemerged.

ARFC provides an opportunity for male rugby players to further their rugby careers within a very social and accepting club. Members of all skill level will have the chance to train along side high calibre athletes and under the guidance of a very reputable coaching staff. Along with the obvious health benefits of consistent physical activity, members will receive the added bonus of the social aspect of the club and sport alike, allowing athletes to build friendships with teammates and opponents across Nova Scotia.

Mission: Our mission is to create a high performance rugby program that is both welcoming and encouraging and can facilitate growth for rugby athletes of all skill levels. 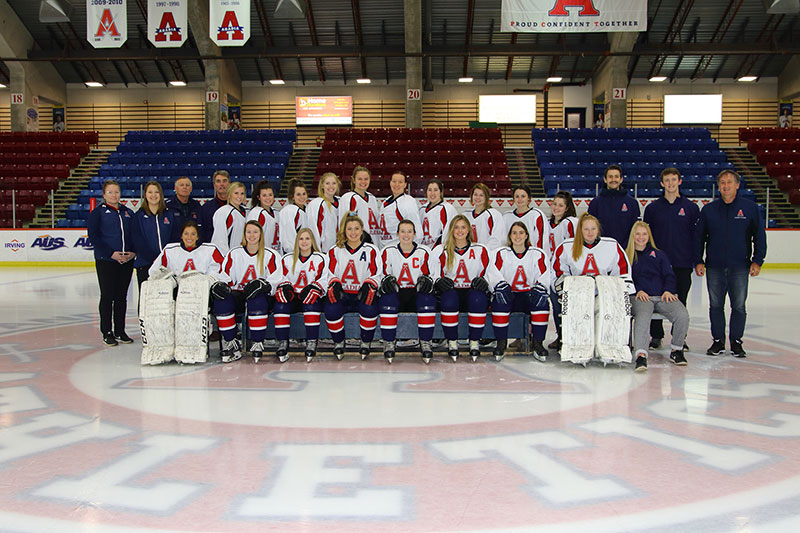 Welcome to the web portal for the Acadia Axewomen’s Ice Hockey Team.

The Acadia Axewomen Ice Hockey Team is a club team that competes within the Atlantic Collegiate Hockey Association and the Nova Scotia Women’s Hockey League Tier 1. We play approximately 25 games a year. Our season runs from October to early March with tryouts in mid to late September. We have 2 practices a week and usually play one-two games a week.

If you are interested in joining the team or have any questions about Women's Ice Hockey at Acadia, please feel free to contact the Club President or the General Manager.