Nearly 60 years after graduating from Acadia University, Dr. Paul Corkum (’65, ’06 HON) has joined a distinguished group of 11 individuals who have been awarded a 2022 Wolf Prize. Dr. Corkum and his research partners – Dr. Ferenc Krausz of Germany and Dr. Anne L’Huillier of Sweden – were named this year’s Wolf Prize Laureates in Physics for pioneering contributions to ultrafast laser science and attosecond physics.

“I am delighted to extend sincere congratulations on behalf of the entire Acadia family to Dr. Paul Corkum on this extraordinary accomplishment,” said Acadia President and Vice-Chancellor Dr. Peter Ricketts. “The formative and foundational experiences he enjoyed at Acadia have certainly been determining factors in his scientific career and personal success, and speak volumes about the kind of educational opportunities available to our students. The Wolf Prize is a world-renowned benchmark of excellence and achievement, and I am deeply honoured to applaud and celebrate this significant accolade and the many contributions Paul has made to our University and alumni communities.”

The oldest of three children, Paul Corkum came to Wolfville from Saint John, NB because his mother, a Baptist who valued Acadia’s denominational roots, wanted him to obtain a university education. Paul started his post-secondary career with a degree in engineering in mind, but a transformative experience in a physics course with Professor Raymond Magarvey (’49) changed all that.

Finding his passion, Paul gravitated toward physics, taking every physics course he could after that and spending his summers doing real-world research with Magarvey until graduation. Paul wrote his first scientific paper at Acadia, basking in the unique kind of faculty support that was available then and continues to this day.

After graduating from Acadia, where Paul met his wife Nadja (’66), Paul obtained his Master’s and PhD from Lehigh University in Pennsylvania. He joined the National Research Council of Canada in 1973 and began a remarkable academic and research career in which he has produced almost 300 peer-reviewed papers and supervised more than 60 graduate students, helping them to launch their own academic careers.

His work with attosecond lasers dates back to a paper he published in 1993. This ground-breaking paper has been cited more than 3,000 times, a feat achieved by only 1,500 of the approximately 60 million academic papers published since 1900. The importance of measuring time in attoseconds is that it allows scientists to watch the activity of electrons in a chemical reaction as the reaction proceeds. This has a profound benefit for scientists studying molecular changes such as what happens to protein when bombarded by X-rays.

"I did my first research project, which led to my first paper, while I was at Acadia,” Paul said.  “The paper described photographing water moving around a bubble – the wake of a rising bubble.  Now I measure electrons as they move from place to place in molecules or solids.  It takes seconds for the wake of the rising bubble to form so an ordinary camera flash was sufficient for my Acadia experiment.  For electrons the flash must be much faster because electrons move from atom to atom in molecules or solids in only a few attoseconds or billionths of a billionth of a second.”

Currently the National Research Council – Canada Research Chair in Attosecond Photonics at University of Ottawa, Paul has received some of the world’s most prestigious awards for scientific achievement and public service. These awards include, in Canada, the Order of Canada, the Order of Ontario, the Queen’s Diamond Jubilee Medal, the Gerhard Herzberg Canada Gold medal for Science and Engineering, and the Killam Prize for Physical Sciences. Internationally his awards include the Frederic Ives Medal of the Optical Society of America, The King Faisal International Prize for Science, the Harvey Prize, The Technion, from the Israel Institute of Technology, and the Einstein Award from the IEEE Photonics Society. Paul is a Member of the Royal Society of Canada, Fellow of the Royal Society of London and a Foreign Member of the US Academy of Sciences and the Austrian Academy of Sciences. He received an Honorary Degree from Acadia in 2006 and was named an Acadia Alumni Association Distinguished Alumni Award recipient in 2015.

Isaac Herzog, President of the State of Israel, congratulated all the 2022 Wolf Prize recipients at a ceremony in the Knesset on June 16, saying, “each of them demonstrates the exquisite qualities of intellect, curiosity, creativity and dialogue that has driven humanity forward.”

The entire Acadia community of faculty, staff, students, and its more than 40,000 alumni worldwide congratulate Dr. Paul Corkum and his family on this exceptional achievement.

Pictured above, Dr. Paul Corkum (left, ’65, ’06 HON) receives the Wolf Prize in Physics from the President of the State of Israel, Isaac Herzog (third from the left).

Below, Dr. Corkum is flanked by his daughter Barbara (left) and wife Nadja (’66). 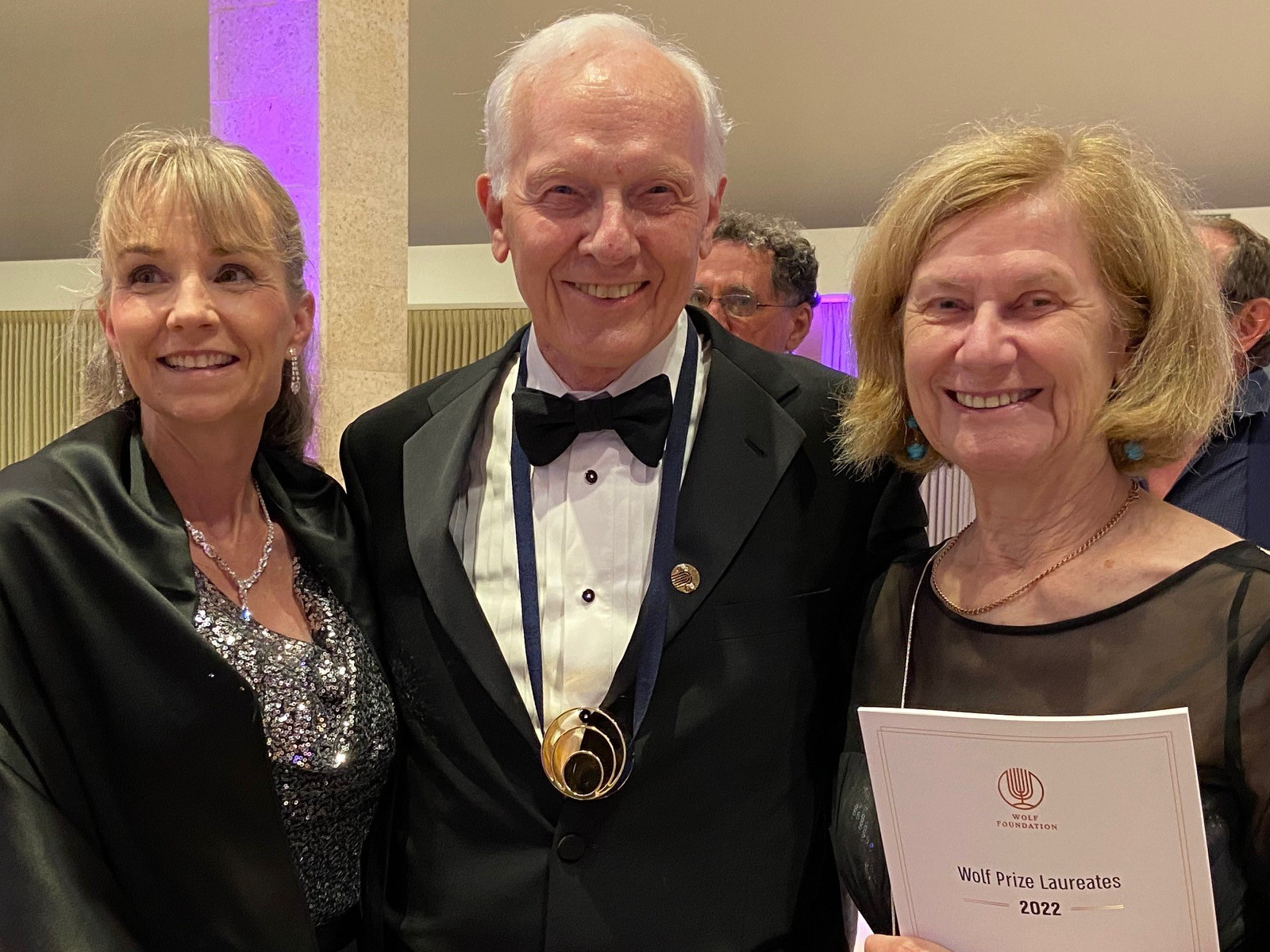