Finding the perfect home for bats 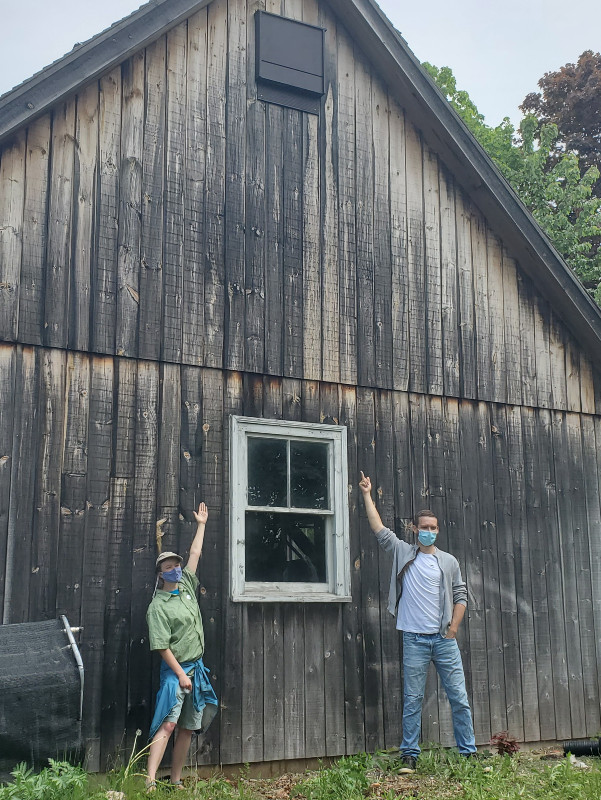 Sometimes learning happens 20 feet up a ladder, 30 minutes from campus with a 40-pound wooden box in one hand and a drill in the other.

That’s where Zack Pate is on a fall afternoon: installing a bat box in Hall’s Harbour for the Annapolis Valley Bat Box Project (in between working on an Environmental and Sustainability Studies degree at Acadia University, a Teaching English to Speakers of Other Languages (TESOL) certificate, paid work, handling charity donations, and the rest of life).

Launched in 2020 with Taryn Muldoon, a third-year biology student at Acadia, the project is helping to house the tiny, flying mammals and collect data in partnership with a military biologist and university researchers with help from volunteers, the Canadian Conservation Corps, high school teachers and students.

“Bats are animals that aren't very well understood because there is a separation between when we are around and when they are around,” Muldoon says. “People often don’t think about bats because they don’t see them. Also, populations in North America are so depressed due to white nose syndrome.”

In the last decade, the fungal infection has decimated Nova Scotia’s bat population, with three species considered at risk: the little brown bat; the Northern myotis; and tri-coloured bats. With human development encroaching on the animals’ preferred hibernating and breeding spots – old trees and barns, caves, abandoned mines – and as each female bat only has one pup a year, native species are struggling to rebound.

Muldoon and Pate are also teaching people why bats deserve affection through a webinar featuring North American bat experts, which you can watch on the Annapolis Valley Bat Box’s Facebook page.

“Bats are very important. Insectivorous bats around here are an incredible asset to agriculture,” Muldoon says. “They eat a lot of pests and insects that would harm us or spread diseases.”

People are keen to help – there’s a lengthy waiting list for boxes – but scientists don’t know what the very best home for a bat is.

What size, shape, colour or location works? What is the ideal temperature? Does humidity matter? Annapolis Valley Bat Box Project has secured funding for monitoring equipment to collect data on what works best.

So far, more than 90 volunteer- and student-built boxes have been installed. Thirty more are being built and another 100 will be set up at CFB Greenwood, with monitoring equipment included, through a partnership with a biologist on the base.

Webinar contributor and Acadia alumna Lori Phinney (‘17) is excited about the way the project closes a gap between people who want bat boxes and those who want to study the animals. The species-at-risk biologist at the Mersey Tobeatic Research Institute (MTRI), which has been gathering reports of bat sightings since 2013, says citizen science is “key to being able to know what is going on with wildlife. You can’t research these animals without it.”

Pate and Muldoon came a long way to meet up at Acadia and connect through a mutual friend to help bats. A few years ago, Muldoon was a foster mother to bats at a wildlife rescue in Scotland. Pate? He was watching nature documentaries between shifts at a work camp in Alberta’s oil sands.

Their dedication to wildlife conservation helped bring them to Acadia: the local choice for Pate, who is from the Annapolis Valley, and an adopted home for Muldoon, who grew up in British Columbia.

“Acadia has taught me a lot about effective research and networking, and I have found that I’ve used those skills in the project,” Muldoon noted.

Pate’s local knowledge helped them connect with Central Kings Rural High in Cambridge, Nova Scotia, where teacher Clyde Fraser’s tech-ed class jumped in to build boxes. Bonus? Fraser and others can use material from the project to teach students about bats.

“We really do it all, from funding to education to production right down to installation at times, and we have bat boxes from Cape Breton right down to Yarmouth,” Pate says.

Muldoon wants to continue bat study at the master’s level. Pate has his eyes on grad school, too, and to make wildlife conservation his career.

“I don’t think there’s a better way to prove that you’re passionate about something or skilled enough to work in that field and get job opportunities than to create a job opportunity for yourself,” he says. “If I can turn this into a national charity then that’s what I’m going to do, because that’s what is going to allow me to do something I love.”

To do that, Muldoon and Pate are seeking help from Acadia alumni. The project needs an accountant to help build it into a registered charity as well as help with communications, social media, governance, funding and getting boxes built and installed. If you can help, email: annapolisvalleybats@gmail.com . 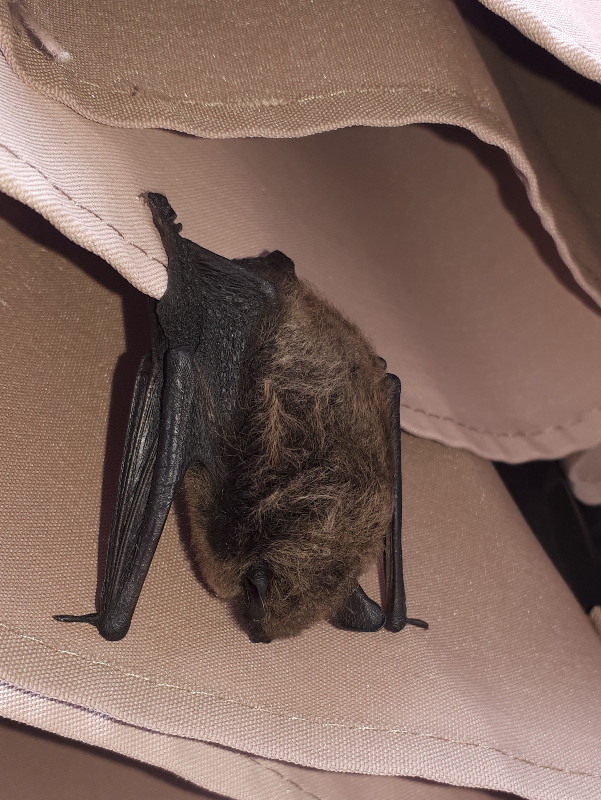 There are native species of bats that migrate south in the winter, only spending summer in Nova Scotia.

Fish and small mammals are the prey of some bat species in the world.

Pictured (top): Taryn Muldoon, left, and Zackery Pate with the bat box they installed on Acadia’s campus. This location will be monitored by Arthur L. Irving Scholars. (Courtesy of the Annapolis Valley Bat Box Project)