Canada and Nova Scotia invest in infrastructure at Acadia University

The Government of Canada values the role of post-secondary institutions as they help equip young Canadians with the education and training they need for future careers that will help them join a strong, healthy middle class. Today’s $15.98-million investment at Acadia University will do just that by fostering the training needed for the well-paying middle-class jobs of today and tomorrow. 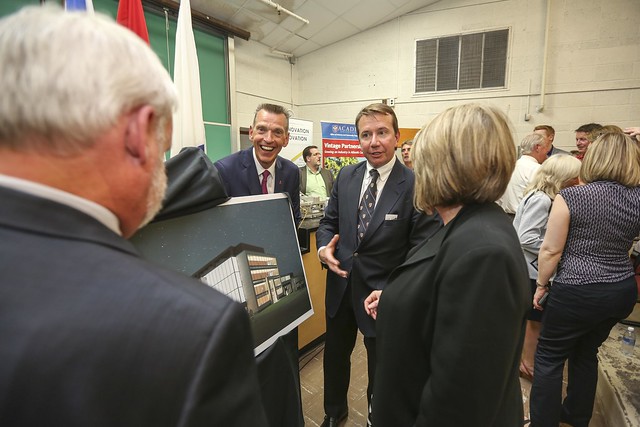 The Government of Canada’s Innovation Agenda aims to make this country a global centre for innovation—one that creates jobs, drives growth across all industries and improves the lives of all Canadians. This investment exemplifies that vision in action and will help create the well-paying middle-class jobs of tomorrow.

The funding will be used to renovate and upgrade Huggins Science Hall and Elliott Hall, two older buildings that are part of Acadia University’s Science Complex. The upgrades will promote intensified research and commercialization activities at the Science Complex, while also improving the buildings’ energy use and efficiency. The project will also see a small structure adjoining the buildings converted into an innovation pavilion, with space for laboratories and support services for industrial liaison, commercialization and co-op education.

Of the $15.98-million investment, $10.48 million will come from the Government of Canada and $5.5 million from the Province of Nova Scotia. Acadia University and private donors will contribute an additional $6.27 million for a total investment of $22.25 million.

In total, the Government of Canada, the provincial government, the institutions themselves and private donors are investing $130 million in universities and colleges throughout Nova Scotia. Federal funding will be allocated through the Post-Secondary Institutions Strategic Investment Fund, which will enhance and modernize research facilities on Canadian campuses and improve the environmental sustainability of these facilities.

As a result of these investments, students, professors and researchers will work in state-of-the-art facilities that advance the country’s best research. They will collaborate in specially designed spaces that support lifelong learning and skills training. They will work in close proximity with partners to turn discoveries into products or services. In the process, they will train for—and create—the high-value, middle-class jobs of the future. And their discoveries will plant the seeds for the next generation of innovators.

That is how the Strategic Investment Fund will jump-start a virtuous circle of innovation, creating the right conditions for long-term growth that will yield benefits for generations to come.

On July 4, 2016, the Government of Canada and the governments of the four Atlantic provinces launched the Atlantic Growth Strategy, which involves targeted actions to stimulate Atlantic Canada’s economy, including supporting key infrastructure projects that contribute to long-term growth and position the region to capitalize on emerging opportunities. Today’s announcement builds on this commitment.

“This once-in-a-generation investment by the Government of Canada is a historic down payment on the government’s vision to position Canada as a global centre for innovation. That means making Canada a world leader in turning ideas into solutions, science into technologies, skills into middle-class jobs and start-up companies into global successes. Investments like this also support our Atlantic Growth Strategy, designed to stimulate the region’s economy and address its challenges while building on Atlantic Canada’s competitive advantages, such as its strong export potential, growing innovation ecosystem and skilled workforce.”

“Investments like these in Atlantic Canada will support our world-class researchers and position Canada as a global leader in research excellence and innovation. Through the Strategic Investment Fund, we are providing Canada’s students with the education and training they need to join a strong, healthy middle class.”

– The Honourable Scott Brison, President of the Treasury Board

“Innovation, R&D and entrepreneurship are key to moving Nova Scotia forward. The Valley region has a long history and successful record when it comes to innovation. This project will give Acadia students access to modern, high-quality facilities that will prepare them for successful careers and help build the skilled workforce we need to support good jobs and economic growth today and tomorrow.”

“This investment in Acadia by the governments of Canada and Nova Scotia addresses a critically important infrastructure need at Acadia. Renovating Huggins Science Hall and Elliott Hall will modernize laboratories that are more than 50 years old while also significantly reducing our environmental footprint. Acadia has experienced strong enrolment growth in the Faculty of Pure and Applied Science, and the renovated facilities will serve over 2,000 students each year. The project also includes an innovation pavilion that will provide new space for students and faculty who are actively engaged in pure and applied research that is directly beneficial to Annapolis Valley business sectors such as agriculture, green energy and information technology. We are grateful for the commitments we’ve received from both governments, which will allow us to proceed immediately with a project that will strengthen one of the foundational elements of Acadia’s academic programming and increase our capacity to support the Nova Scotia knowledge economy.”

Office of the Minister of Innovation, Science and Economic Development