“Welcome home,” are two words often heard by people participating in citizenship ceremonies across Canada each year. But for 45 new Canadian citizens from 13 countries attending a ceremony at Acadia University, the messenger was Prime Minister Justin Trudeau. 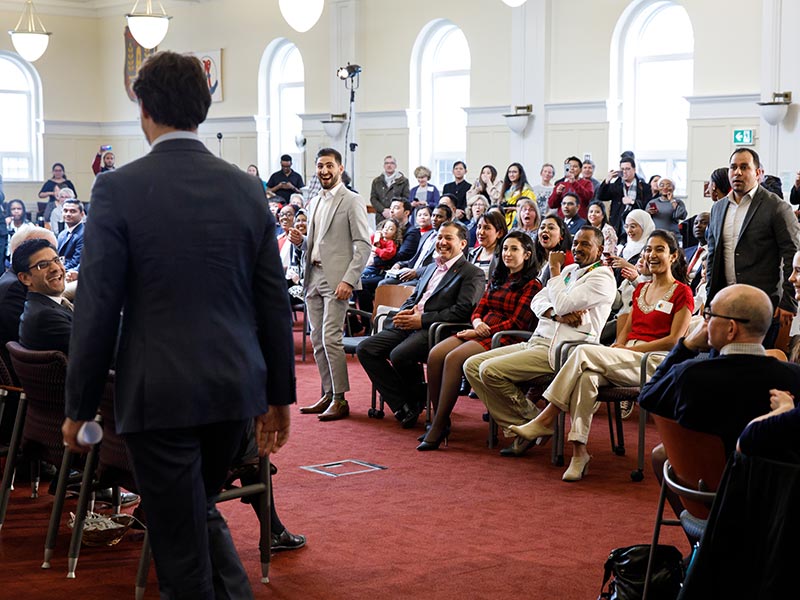 His attendance at the Wolfville event on March 3, 2020, was a specially-guarded secret, feigned as a technical glitch in a standard video message from Parliament Hill. When he walked to the podium, the room erupted in applause.

“It is incredible for me to join you on such a special day,” Trudeau said. “Being Canadian is a concept far too rich to be confined by geography or defined by faith or ethnicity. People of all backgrounds built this country and we are all the better for it.”

Trudeau encouraged each new citizen to celebrate the journey that led them to choose Canada and to mark the day as the start of new chapter in their lives as Canadians. “From where I’m standing, the future looks very bright because people like you have chosen Canada. Welcome home,” he said.

Alumna becomes a Canadian at “home”

One new Canadian in the room already felt at home. Mrugakshee Palwe (’18) from Pune, India came to Canada when she was 18 to study computer science at Acadia University. Today, Palwe is the co-founder of Atlantic Blockchain Company in Halifax. She was thrilled to be back on campus. 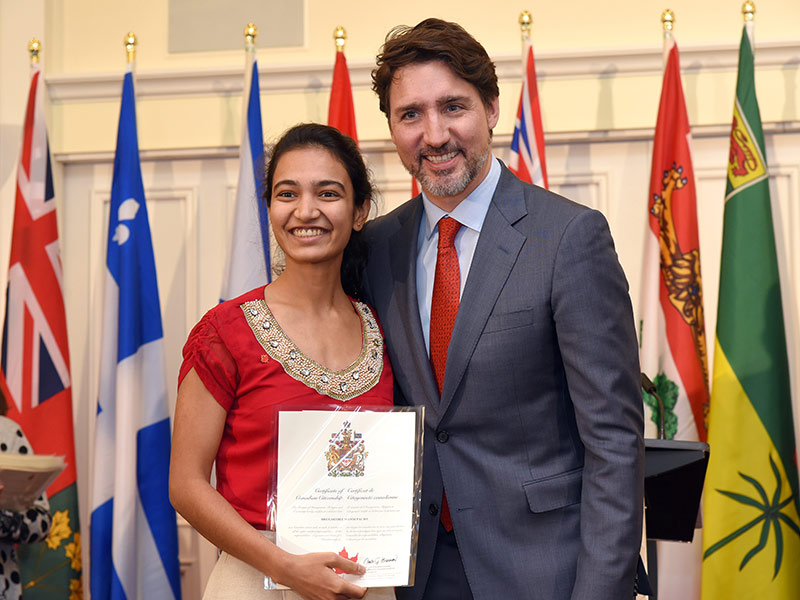 “Acadia is where I started my journey and this is where I get to become a Canadian citizen,” she said, explaining that in 2010 her entire family was considering moving to the country. When that fell through, she decided to take the leap herself by attending university in Canada.

“For me, the most meaningful part was standing with people from all over the world to take the oath and sing the national anthem together,” Palwe said.

“Living here and being part of the university community has taught me so much about the values of acceptance and diversity — no matter where we came from or what language we speak, Canada accepted us with open arms. I’m excited to start this new chapter as a citizen and to be part of shaping the story of this great country.”

Acadia University hosted the March 3 ceremony in partnership with the Institute for Canadian Citizenship and Immigration, Refugees and Citizenship Canada. The day began with a welcome by Elder Lorraine Whitman before proceeding to a roundtable discussion.

In honour of International Women’s Day (IWD) in March – which is a global day celebrating the social, economic, cultural, and political achievements of women – the roundtable discussions were led by women leaders from Acadia and its alumni community.

“Acadia is delighted to take part in this special occasion and to recognize this important milestone for the newest members of our Canadian family,” said Dr. Peter Ricketts, President and Vice-Chancellor of Acadia University. “I can relate to how some of you are feeling today.” Ricketts took part in a similar citizenship ceremony in 1983 when he swore an oath to become a Canadian citizen. The ceremony he participated in was held in Halifax and presided by Acadia alumna, Judge Joan Fraser, who was present at the Wolfville event.

“This is an important ceremony that we are honoured to host on our campus as we celebrate the diversity and inclusion of our great country, our campus and our community,” he said.
For many, the official ceremony is an incredibly emotional experience that is the culmination of a long journey toward citizenship in Canada.

See photos in our gallery. Click the arrow in the image to start our slideshow. 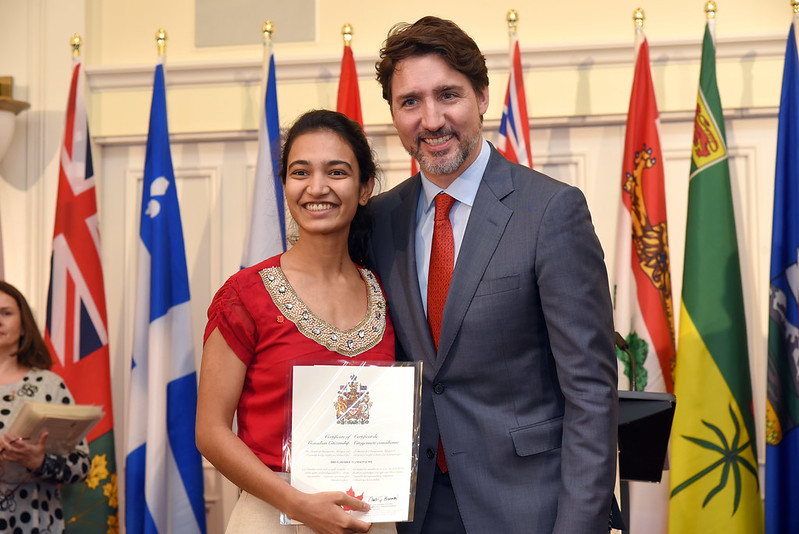