Acadia University President Emeritus Ray Ivany’s portrait was unveiled at a reception in the Garden Room of the K.C. Irving Environmental Science Centre on October 4, 2022. The painting, created by artist Steven Rhude, will take its place alongside former university presidents in the lobby of University Hall.

Ivany served Acadia as its President and Vice-Chancellor from 2009-2017. He joined the University after more than 25 years of post-secondary leadership experience, including two terms as President and CEO of Nova Scotia Community College. In 2012, he chaired the Nova Scotia Commission on Building our New Economy, which led to the release of a seminal report, Now or Never: An Urgent Call to Action for Nova Scotians.

His accomplishments in education and public sector leadership have been celebrated by many organizations, including Acadia, where he received the Arthur L. Irving Medal of Commitment and the titles Honorary Alumnus and President Emeritus. He also holds honours from Waterstone, the Halifax Chamber of Commerce, and Canada’s Public Policy Forum. He is the recipient of the Order of Nova Scotia and the Order of Canada.

Presidential portraits are a traditional component at Acadia. Ivany’s portrait features the Harriet Irving Botanical Gardens with the K.C. Irving Environmental Science Centre as the setting. In addition, former students Annie Kennedy (’22) and Matt Rios (’14) are portrayed in the middle ground. On a personal note, in Ivany’s hands is a medallion featuring the engraved word “Believe.” It was a gift from his wife, Laurie Graham, and was kept on his desk during his tenure at Acadia.

The artist Steven Rhude is valued as a Nova Scotian artist who has steadily pursued his vision of vernacular imagery with an imposing strategy. 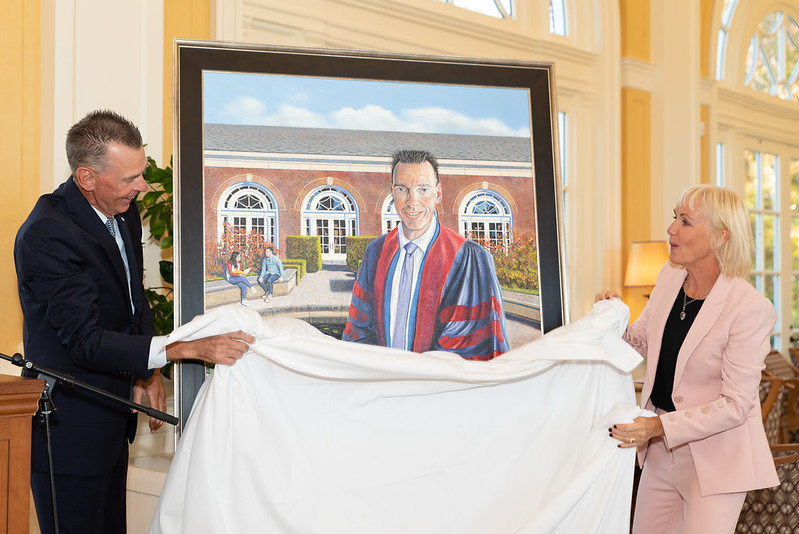 Read about the portrait process on Steven Rhude’s blog.