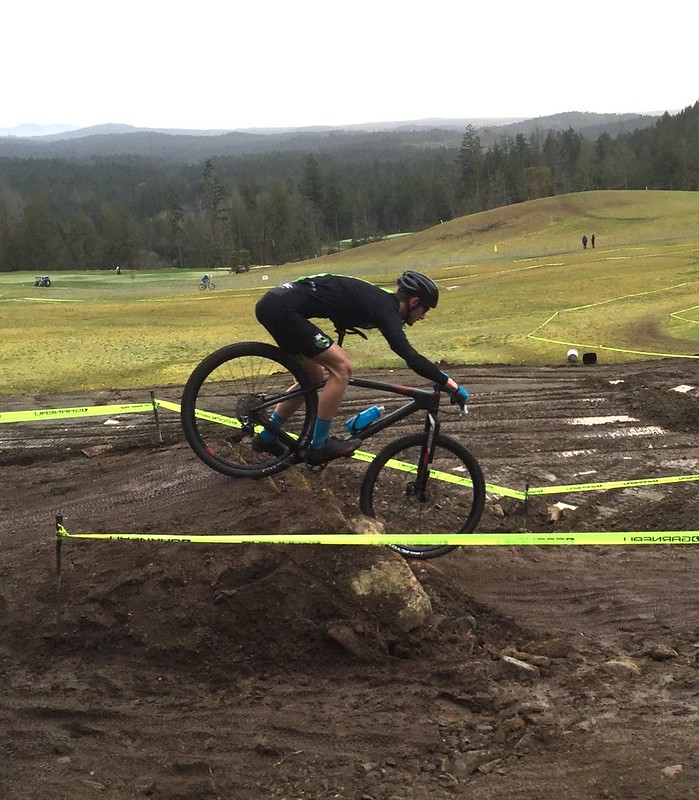 His first national-level mountain bike race was “like going from zero to 100,” according to second-year biology student Ben Hewins, back home and on campus after his initial Canada Cup race of the 2016 season in British Columbia. “I’d been racing in Nova Scotia and had a couple of top five finishes in Men’s A, but I wanted to gain national experience. In my first race at the national level last year I didn’t finish and I found it so much faster than anything I’d been used to. I felt much better this March at Bear Mountain, where the field had a number of potential Olympic team members.”

No stranger to high level athletic competition, Ben played elite hockey growing up in Kentville, N.S. but turned his attention to mountain bike racing in his late teens. He credits the local cycling community with fueling his interest, including Dr. Jim Brittain, associate professor in Acadia’s Department of Sociology.

“During research related to the local and regional cycling community in 2014, Colin Banks, owner of Banks Bikes in Wolfville told me about a young up-and-coming mountain bike racer, Ben Hewins, who showed promise and a true passion for the sport,” says Dr. Brittain. “Upon meeting Ben, I was immediately impressed with his rounded approach toward not only cycling but also his future. Apart from a regimented training schedule, he was adamant about pursing his Bachelor of Science.”

In a short period of time the bond between professor and student has become a close one. Ben says he talks to Dr. Brittain almost every day, often grabbing a coffee over which they can talk about their shared interest in cycling. But Dr. Brittain also plays an important role in preparing Ben for competition.

“Jim is a road racer and road training is important preparation for mountain bike racing because it improves endurance,” says Ben. “My goal, beyond a podium finish in Nova Scotia and a top 10 result at the national level this year, is to make the 2017 Nova Scotia Canada Games team. There are three mountain bike and five road racers on the team and I’d like to be member of the team in either discipline – or both.”

Ben credits Dr. Brittain for getting him interested in road racing while on a cycling trip to Girona, Spain that included Ben’s father, local orthopedic surgeon Dr. Ed Hewins. Girona is home to many of the world’s top riders and the trip inspired Ben to see how far he could progress in the sport. “Balancing school with competition takes discipline,” he says. “I train every day on either a spin bike or with weights and year-round, rain or shine, I ride 100-150 kilometres every Sunday with a group in Halifax. I signed with Oakley Atlantic for the 2016 season and the excitement of being part of the team keeps me motivated.”

The 2014 recipient of the Adrian Campbell Scholarship, named for a Valley resident known as an intense competitor who also achieved balance in his career and community service, Ben is looking forward to medical school once he’s completed his Acadia degree. “My Acadia professors are very supportive and I found the transition from high school to university easy because of this. I’m from here and many of my friends chose to go away to school, but with its small classes and outstanding faculty, Acadia was the right choice for me.”

“While it may sound cliché, there truly is no university like Acadia,” says Dr. Brittain.  “Few post-secondary institutions have a culture where, on any given day, students and faculty, staff and administration, or the president and a first-year student do not simply say hello but rather share a personal dialogue on how they are keeping on. What Acadia does, as in Ben’s case, is support and prepare young adults for the world ahead by encouraging them to develop the critical alongside the professional. While academic excellence is at our core, and that which is nurtured within our walls, it is the whole person that is discovered at Acadia.”