Alumni are one of Acadia University's greatest assets. The Acadia Alumni Association offers and supports a suite of awards and honours to recognize and showcase those who have earned distinction and achieved inspirational success in life and career. Their diverse contributions reflect favorably on Acadia and serve to represent and promote the University both here at home and around the world.

The Acadia Alumni Distinguished Alumni Award recognizes the outstanding achievements of an Acadia University alumnus or alumna whose endeavours have distinguished them professionally or in the community and brought honour to the University. This award is intended to honour senior alumni with greater than 10 years post-graduation from Acadia.

The Acadia Alumni Outstanding Young Alumni Award recognizes the outstanding achievements of an Acadia University alumnus or alumna whose endeavours have distinguished them professionally or in the community and brought honour to the University. This award is intended to honour alumni who graduated within the past 10 years.

The Acadia Alumni Faculty Award for Excellence in Teaching recognizes a continued record of excellence in teaching students and future alumni of Acadia University with a focus on the faculty member’s professional and teaching accomplishments. Candidates for this award must be current full-time, part-time or contract members of the teaching faculty and have taught at Acadia University for at least three years.

The Acadia Alumni Isaac Chipman Award for Excellence in Alumni Service recognizes an alumnus or alumna of Acadia University who has had a significant positive impact on Acadia and its alumni. The award focuses on a recipient who has provided consistent support in the form of time, effort and resources to the services and promotion of the advancement of the University and its alumni.

Nomination deadline: May 31 annually. Click here for a Nomination Form. 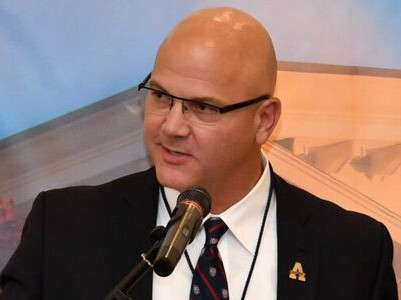 The Acadia Alumni Association is proud to announce that Geoff Irvine (’87) is this year’s recipient of the Acadia Alumni Isaac Chipman Award for Excellence in Alumni Service.

Geoff has been a friend of Acadia for more than 30 years, serving on Student Council and Frosh Committee as an undergraduate; as Executive Director of Alumni Affairs from 2006-09; as a member of Acadia’s Board of Governors twice (in 2005-06 and 2016-19); and on the Associated Alumni of Acadia University (now Acadia Alumni Association) Board in several capacities, including Vice-President and President (2016-18).

He has always been a champion of the alumni community in good times and bad, persistently encouraging mutual respect and collegiality and never losing sight of the value that alumni bring to Acadia through their shared experience, storytelling capacity, fundraising ability and overall affection for and affinity to the institution.

“Geoff is a fine example of what volunteerism should be,” she says. “You don’t have to spend a lot of time with him to know how passionate he is about Acadia and how important alumni are to the University’s success, now and in the future. He has cultivated relationships, recruited students, established key protocols that govern our executive actions today, and his long history of service exemplifies his dedication to sustaining the Acadia experience for prospective students who will one day graduate and become part of the Acadia alumni family.”

“I’m honoured to receive this award named after such a significant Acadia alumnus,” Irvine says. “I have been blessed to be able to benefit from the unique educational and personal growth experiences offered by Acadia and made lifelong friends both as a student and then many years later as a leader in the alumni community. I strongly urge all alumni to get involved with Acadia in any way you can, including mentoring and recruiting students, attending events or making a monthly donation to a program of interest. The mental drift back to our halcyon days in Wolfville is a tonic!”

The Acadia Alumni Isaac Chipman Award for Excellence in Alumni Service recognizes a graduate of Acadia University who has had a significant positive impact on Acadia and its alumni. The award focuses on a recipient who has provided consistent support in the form of time, effort and resources to the services and promotion of the advancement of the University and its alumni. 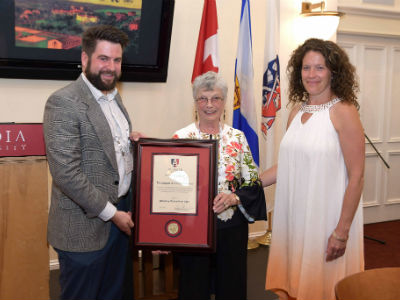 Beverley (Trites) Richardson, a member of the Class of 1960, studied secretarial science with a music minor. She was involved in the Acadia Choral Society, Acadia Orchestra (violin), NFCUS, SCM, PC Party, cheerleading, and served as a monitor for Horton Academy girls in Seminary. Beverley entered and graduated from Victoria General Hospital in Halifax from the three-year nursing program then married Dick Currie, whom she met on the Acadia basketball court. The couple has three daughters and eight grandchildren. Beverley nursed private duty for cancer patients in Saint John, N.B., where she was involved with Acadia Alumni (1962-1968). The couple moved to Boston when Dick attended Harvard Business School, and opened a premature nursery at the Cambridge Hospital. Years later, Beverley and her family settled in Toronto, where she continued to be involved with Acadia Alumni. She was involved also with volunteer work at her girls’ school, grief and bereavement counseling at her church, and fundraising events. Beverley helped take the Timothy Eaton Memorial Church Choir to England and Scotland, arranging all venues and accommodations prior to the trip. She was the Editor for Crafts for J.A.M. magazine for young people for three years. Beverley traveled extensively, enjoying many Pro-Am golf tournaments along the way. In 1988, she married Acadia grad Grant Richardson, moving to Truro, where he taught Physics and Math. Grant took a year study leave in England, returning to Truro, and set up a 4.5 star Bed and Breakfast (The Silver Firs) which operated for nine years. Special guests included Prime Minister Kim Campbell, a Four-Star General, Vienna String Quartet, and more. In addition, the company catered to wedding parties. Beverley worked on many church boards and the Colchester Hospital Foundation. In 2000, Beverley moved to Wolfville. Her hobbies include gardening, reading, needlework, and painting in watercolour and acrylics. Beverley has been busy for the past four years organizing “Friends of Lucas” as a financial support system for pianist Lucas Porter. She keeps busy on the Board of Landmark East and the Valley Regional (Hospice) Foundation as well as involved in Wolfville Baptist Church organizations. She is presently the President of the Social and Benevolent Society, which organizes and prepares for all church receptions, teas and dinners, including the Divinity College.

The Athenaeum and Acadia Alumni Student of the Year Award

Created in 1981, The Athenaeum and Acadia Alumni Student of the Year Award recognizes a student who has excelled at Acadia and embodies the Acadia spirit. The award is presented annually to a nominee who has contributed to the Acadia and Wolfville communities through extracurricular and/or academic activities and has worked to further the Acadia spirit. Nominees must be full-time students. Preference will be given to students who will be graduating in May of the current academic year.

Student of the Year Award Recipients

The Acadia Alumni Outstanding University Service Award is presented in recognition of a staff member who has had a significant positive impact on Acadia, its students and its alumni. The award is an expression of the Alumni Association’s appreciation for an outstanding staff member who has contributed above and beyond job requirements to ensure that Acadia provides an environment that encourages academic, athletic, cultural, organizational and social development. Of greatest importance is the person's ability to foster an environment in which students and/or members of the Acadia community thrive.

The Acadia Alumni Association is proud to announce that long-time Acadia employee Cheryl MacDonald is this year’s recipient of the Acadia Alumni Outstanding University Service Award.

If anyone at Acadia epitomizes the term, ‘university service’, it’s Cheryl. Currently Administrative Manager, Dean of Arts, Cheryl has devoted herself to the University for more than 40 years in a variety of different positions and capacities, greeting the public, alumni, students, faculty and staff with consistent kindness and professionalism.

She has an encyclopedic knowledge of Acadia’s administrative structures, personnel and institutional culture that she shares regularly with Chairs, Directors and Coordinators in the Faculty of Arts, and her tremendous commitment has left an indelible mark that will stand as a benchmark of service excellence for years to come.

“Cheryl represents the very best of what Acadia is all about,” says Alumni Association President Donalda MacBeath (’75). “Since her arrival at Acadia in July 1979, she has been engaged on many levels, working in a front-line role that involves staff, students, alumni, the public and members of Acadia’s administration. Her institutional knowledge, genuine caring and general goodwill has characterized the Faculty of Arts for more than four decades. We are delighted to acknowledge her long-standing service and considerable contribution to Acadia’s reputation, and congratulate her on this achievement.”

Dean of Arts Dr. Laura Robinson (’88) says, “from small (but so important) gestures like having dog treats at the ready for visiting canines and a bowl of candy on her desk for human visitors to larger competencies, such as her knowledge of the operations of the Faculty of Arts and the collective agreement, Cheryl makes a real difference every day. With her compassion, good humour, and readiness to dig in to get the job done, Cheryl embodies and transmits the Acadia spirit.”

Interestingly, Cheryl is also a member of Acadia’s alumni community. She began a BA in sociology part-time in 1991 and completed the degree in 2000.

The Outstanding University Service Award is an expression of the Alumni Association’s appreciation for a staff member who has contributed above and beyond job requirements to ensure that Acadia provides an environment that encourages academic, athletic, cultural, organizational and social development.

1999 Staff of Physical Plant – Past and Present 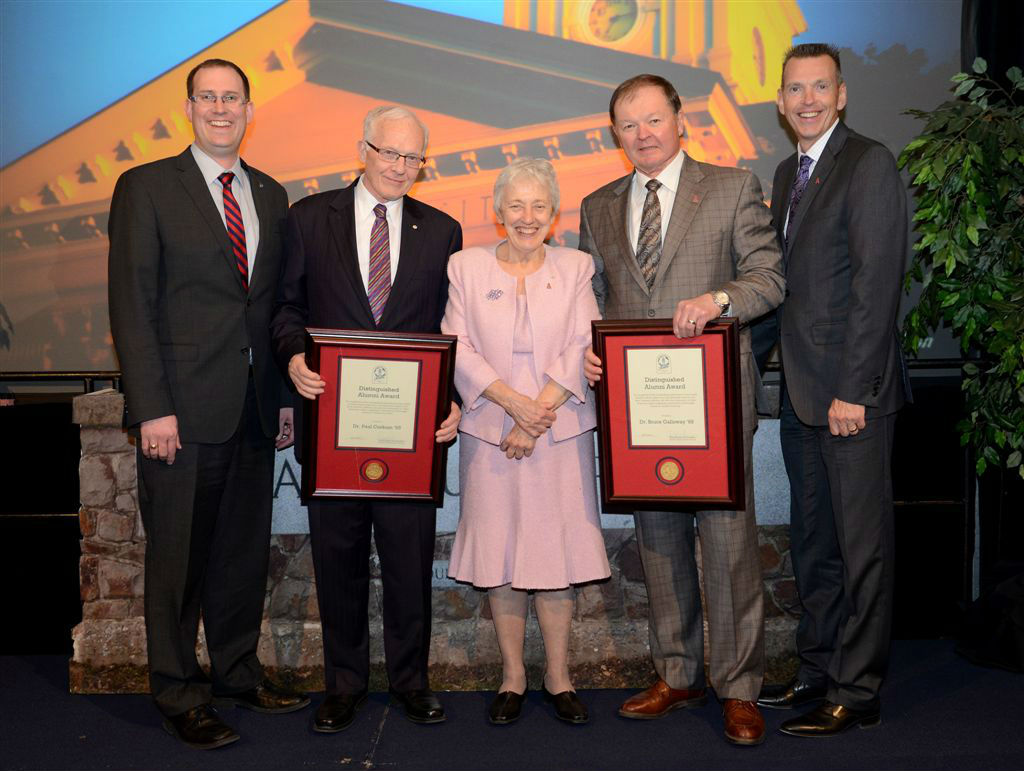