The son of former slaves, Rev. William White (1903) was born in Virginia in 1874. He moved north to attend Acadia in 1900, becoming only the second black man to be accepted at the school to that point. His presence on an all-white campus is testament to his perseverance and courage, and while at Acadia he created a legacy that endures today. 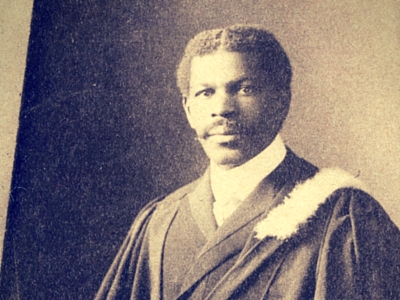 White was a true student-athlete, excelling in several sports, including rugby. In October 1902 Acadia was scheduled to play a team from Truro, but they threatened to cancel the contest unless White was benched. To their credit, his teammates refused these demands and stood in solidarity with him.

White subsequently graduated with a BA in theology and was ordained in 1903. At the outbreak of the First World War, he served as pastor of the all-black 2nd Construction Battalion of Nova Scotia. During this time of military segregation, he was the lone black officer in the entire British army. In the face of such injustice, it would have been easy for Rev. White to become embittered, but instead he used the opportunity to speak out against bigotry and discrimination.

When the war was over, he became minister at the Second Baptist Church of New Glasgow, N.S. From this base, he issued a regular radio broadcast that was heard across Canada and in parts of the United States. He later received a calling to Cornwallis Street Baptist Church and remained there for almost 20 years.

Acadia presented him with an Honorary Doctorate of Divinity in 1936 in recognition of his accomplishments. He was the first man of colour in Canada to receive such a distinction. Although he died at an early age, his impact on Acadia, Nova Scotia and Canada was profound. Through his ministry and efforts at unity between blacks and whites, he offered solace and hope for an entire generation of Nova Scotians. In her film Captain of Souls, director Fern Levitt tells White’s story through word and song.

White’s daughter, Portia, went on to dazzle the musical world with her sublime contralto voice.

Black history is our history