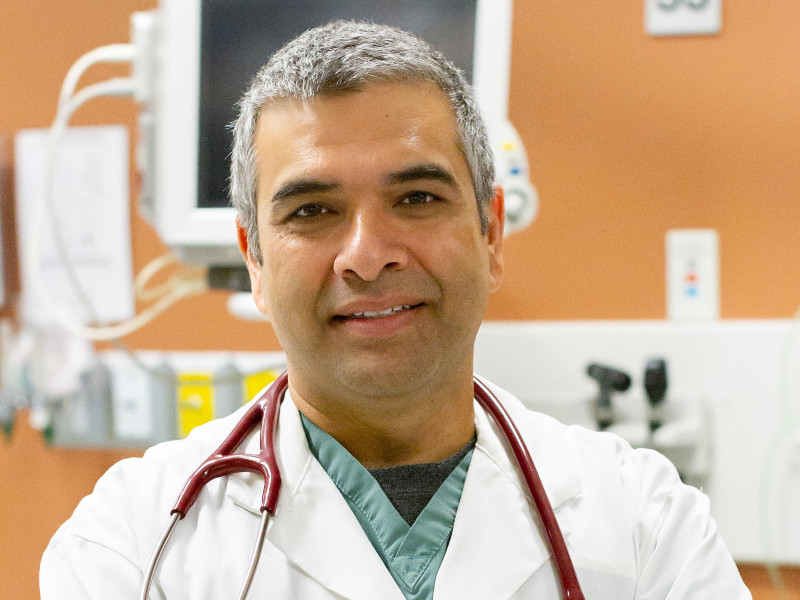 Dr. Trevor Jain (’93) is an avid lifelong learner whose curiosity and passion for knowledge has allowed him to forge an enviable career as a trauma physician and disaster medicine specialist.

Dr. Jain is a 34-year veteran and Lt. Col. in the Canadian Armed Forces, a strong community advocate and teacher whose commitment to the health and well-being of others has been acknowledged through numerous awards and accolades. He is currently completing a PhD in disaster medicine at the University of Brussels and continues to serve in the army as the 36th Canadian Brigade Group Surgeon.

In high school, Dr. Jain joined the Canadian Armed Forces as an infantry soldier, later earned a BSc in biology from Acadia and continued his studies in Halifax, where he obtained an MD from Dalhousie Medical School. He was seconded by the military on Sept. 3, 1998 while still a student to design, set up and run the morgue as the pathology operations officer in the aftermath of the Swissair Flight 111 disaster off Peggy’s Cove, Nova Scotia. He received the Meritorious Service Medal of Canada for his efforts by the Governor-General in 1999.

Of the many accolades he has earned throughout his career, perhaps the most noteworthy is the Order of Military Merit (officer level), awarded in November 2018. It’s the second highest military honour presented by the Governor-General to recognize outstanding military service, and of the 26,000 people enlisted in the Canadian military at that time, Dr. Jain was one of only five to receive the clasp. To make it even more poignant, he was nominated for the honour by members of his own brigade.

He has also received the 2021 Canadian Medical Association John McCrae Memorial Medal, which recognizes current or former clinical health services personnel of the Canadian Armed Forces for exemplary service, noting that winners have demonstrated compassion, self-sacrifice or innovation beyond the call of duty, and their efforts have greatly benefited the health or welfare of military personnel or civilian populations.

The Acadia Alumni Association applauds his remarkable commitment to public service and is pleased to add another accolade by naming Dr. Trevor Jain as its 2022 Distinguished Alumni Award recipient.

“Dr. Jain’s persistent curiosity and ambition to learn represents the untapped potential that exists in all of us,” says Acadia Alumni Association President Donalda MacBeath (’75). “The foundational experience he had at Acadia prepared him to meet the challenge of the Swissair Disaster in 1998 and he has continued throughout his career to develop his personal and professional skills to help others, save lives and provide leadership amid chaos and distress. He is a bright light in our alumni community, and we are delighted to recognize him as this year’s Distinguished Alumni Award recipient.”

Lt. General (Retired) Stephen Bowes (’81), also a Distinguished Alumni Award recipient (’06), notes in a letter supporting Dr. Jain’s nomination that “his career has been marked by selfless leadership of a rare high standard and has brought great honour to our country, to both military and civilian health professions, and to Acadia University.”

Indeed, Dr. Jain’s Acadia roots run deep. His father, Dr. Nirmal Jain, was a long-time Acadia employee and librarian in the Vaughan Memorial Library and his mother, June, an Annapolis Valley educator, is a two-time Acadia graduate (‘78, ’93). His sister, Teresa Pelley, is also an Acadia graduate, earning a master’s in 2007.

Dr. Jain is a married father of two and lives with his wife Kara in picturesque Stratford, PEI.