Liam Maaskant named The Athenaeum/Acadia Alumni Student of the Year 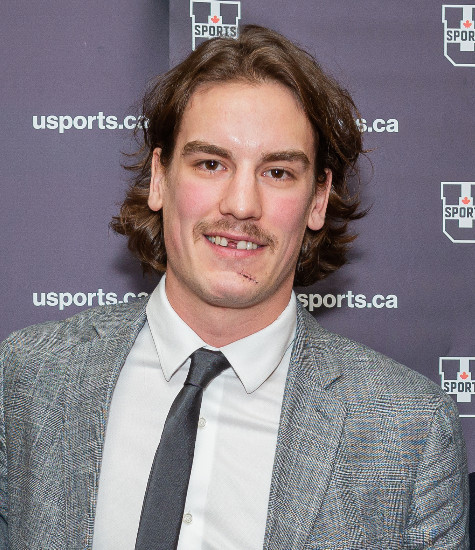 The Acadia Alumni Association, in cooperation with The Athenaeum, is proud to announce that Clinton, Ontario native Liam Maaskant (’19) is the recipient of the Student of the Year Award for 2020.

An Academic All-Canadian in 2016, 2017 and 2018, this talented student-athlete was captain of the Acadia hockey Axemen during the past two seasons and an assistant captain for two seasons prior to that.

Additionally, during his five-year career at Acadia, Liam volunteered with Acadia’s S.M.I.L.E. (Sensory Motor Instructional Leadership Experience) program. During his first four years, he was actively involved with one S.M.I.L.E. buddy then moved on to be a Student Leader, where he supervised S.M.I.L.E. instructors every Tuesday and Thursday morning. Liam not only worked with the students in S.M.I.L.E. classroom sessions, he also took the time to chat with his buddy and others after his hockey games.

Liam has also been actively involved in the Acadia Players’ Association for the past five years.  He began as a Charity Representative and then, in year three, stepped into and played a very important role as co-president with Skye Forcier (’20), working with and providing guidance for many to raise funds for mental health initiatives at Acadia. He also assisted student-athletes in fundraising initiatives in the community.

In early 2020, Liam was instrumental in his role as a co-student coordinator with Forcier in launching the Acadia4U Athletics Wellness program. It assists varsity athletes with their mental, physical and academic well-being while at Acadia. This program is currently unfolding and will help many athletes moving forward with maintaining a well-balanced life while studying at Acadia.

Liam has also volunteered his time at a number of fundraising and minor hockey events, including Acadia's Hearts on Ice, which raises money for the Valley Cardiac Rehab Society, and the Hannah Miller Memorial Tournament, which gives back to the local hockey community.

As a result of the Godfrey Award, Liam was nominated for and won the prestigious U SPORTS Dr. Randy Gregg Award, a national honour that acknowledges an outstanding student-athlete’s commitment to Community Service. He is the first member of the Axemen ever to receive the Randy Gregg Award.

Alumni Association President Donalda MacBeath (’75) said Liam’s nomination was “a testament to what can be accomplished through desire, commitment and hard work. During his time at Acadia, Liam has embraced the Acadia mission and spirit, as demonstrated by the breadth, depth and duration of his commitments to community involvement, the University, his fellow students and academic studies. We extend congratulations to Liam on receiving this award and thank him for his many contributions to Acadia and our community."

The Athenaeum and Acadia Alumni Student of the Year Award recognizes a student who has excelled at Acadia. It is presented annually to a nominee who has contributed to the Acadia and Wolfville communities through extracurricular and/or academic activities and has worked to further the Acadia spirit.