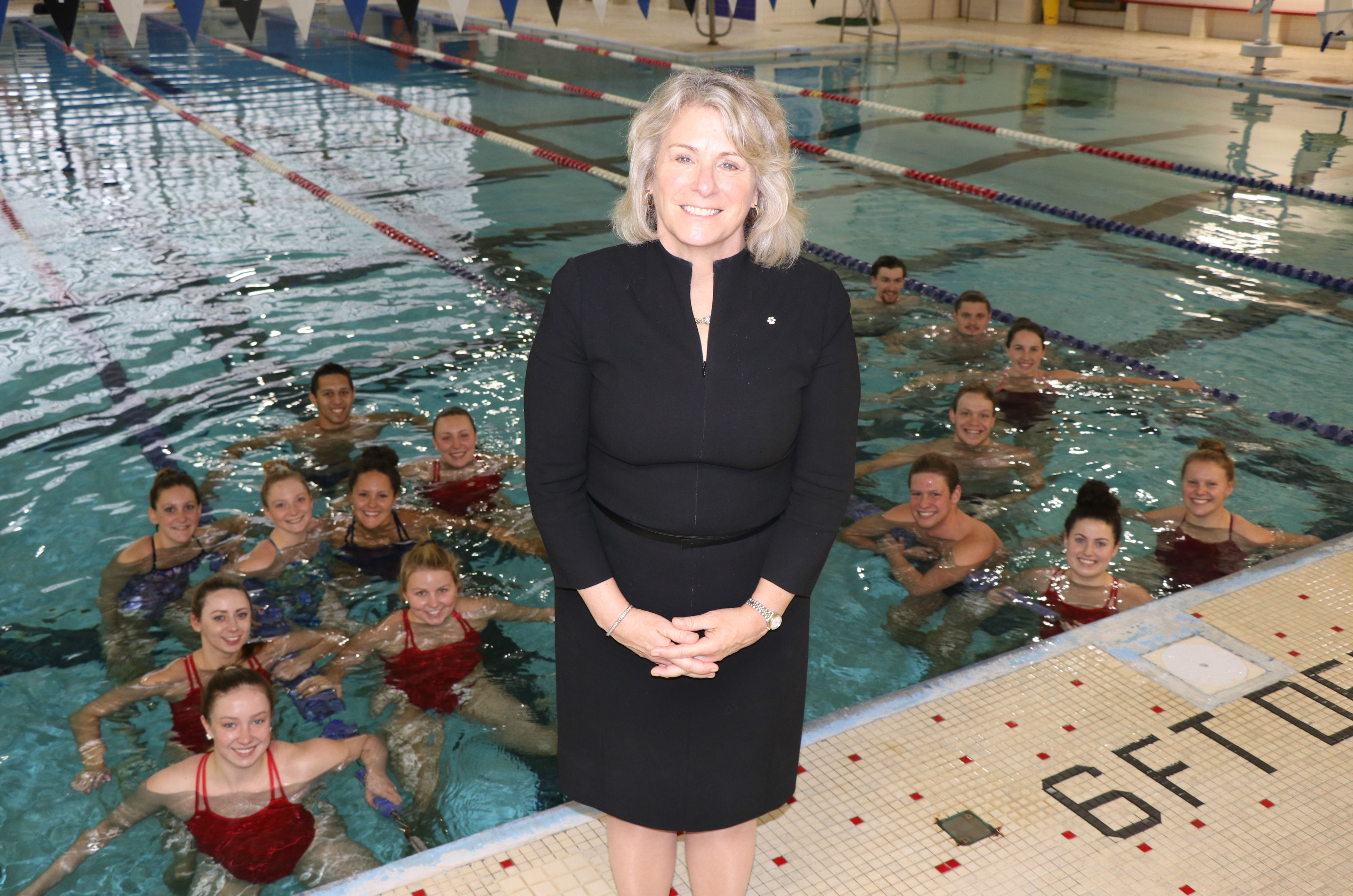 Dr. Elizabeth Cannon (’82, ’10) is a passionate advocate for the importance of higher education in driving discovery and innovation, finding solutions for the world’s greatest challenges, and fostering the talents of young women and men who will become our future leaders.

A proud alumna who earned two degrees at Acadia, Dr. Cannon’s commitment to the University has never wavered no matter where her enviable career has taken her – most notably her tenure as President and Vice-Chancellor of the University of Calgary (2010-2018).

On Wednesday, Oct. 23, 2019, Acadia University welcomed Dr. Cannon back to campus. She met with President Dr. Peter Ricketts, chatted with Women in Science and Engineering (WISE) students and faculty, and announced in the new McCain Commons an extraordinarily generous gift of $265,000 in support of Campaign for Acadia. A donor since 1989, Dr. Cannon’s latest gift will have a tremendous impact on Acadia, its students, faculty and staff for generations by establishing:

Elizabeth Cannon WISE Awards. These awards are granted, on the recommendation of the Dean of Science or designate, to female students majoring in science in recognition of academic excellence, financial need, and involvement in Acadia’s WISE program.

Dr. Ricketts thanked Dr. Cannon for her commitment and said, “On behalf of all members of the Acadia community, we are extremely grateful for this very kind and generous gift. We are also exceedingly proud of all you’ve accomplished and know you’ll continue to have tremendous influence in science and engineering. Your support for our WISE program and female student-athlete swimmers is a shining example for all of us to model, and I know that these awards will have major impact now and for years to come.”

Dr. Cannon’s resume is both extensive and impressive, and she is indeed a titan in the post-secondary milieu. She is President Emerita and a professor of geomatics engineering at University of Calgary, and served as President and Vice-Chancellor from July 2010 to December 2018.  An expert in geomatics engineering, Dr. Cannon’s research has been on the frontier of Global Positioning Systems (GPS) since 1984 in both academia and industry, and she has commercialized technology to over 200 agencies worldwide.

She has a long history of working effectively with industry and the surrounding community, has served on numerous public‐ and private‐sector boards, with national advisory groups and community committees, including positions as: past-president of the U.S.‐based Institute of Navigation; board member and interim chair of the Canada Foundation for Innovation; and board member of the Royal Society of Canada, the Alberta Ingenuity Fund, and the TELUS SPARK World of Science. She is currently Chair of the Canadian Knowledge Research Network board of directors, member of the board of directors of the Association of Universities and Colleges of Canada (AUCC), and is Vice-Chair of the U15 Group of Canadian Universities.

Throughout her career, Dr. Cannon has championed women in non‐traditional areas and worked to ensure that women receive opportunities to excel, particularly in science, technology, engineering and mathematics.

She is the recipient of many honours and awards, including the Johannes Kepler Award from the U.S. Institute of Navigation, the world’s most prestigious satellite navigation prize; NSERC’s E.W.R. Steacie Memorial Fellowship, one of Canada’s premier science and engineering prizes; the Canadian Council of Professional Engineers’ Young Engineer Achievement Award; and, in 2013, the Gold Medal Award from Engineers Canada.

In 1998, she was selected as one of Canada’s Top 40 Under 40; in 2006, she was named one of Canada’s Top 100 Most Powerful Women by the Women’s Executive Network; and in 2009 was recognized with the ASTech Outstanding Contribution to Alberta Science and Technology Community award.

Dr. Cannon holds a BSc in mathematics and CAS from Acadia University and a BSc, MSc and PhD in geomatics engineering from the University of Calgary. She has received honorary doctorates from the University of Ottawa, Acadia University and Université de Montreal, and was the Acadia Alumni Association’s Distinguished Alumni Award recipient in 2014. Born and raised on Prince Edward Island, Dr. Cannon was an active athlete who competed as a Canadian Interuniversity Sport (CIS) swimmer during her undergraduate studies. She is married to geomatics engineering professor Gérard Lachapelle and has two children.

Campaign for Acadia is the most ambitious fundraising initiative in Acadia’s history, with a goal of $75 million. To learn more, please visit campaign.acadiau.ca. To view more photos from the event, click here.