Honouring the past by making a gift for the future

When Terry (’65) and Heather Hennigar’s daughter, Crystal, passed away from cancer in 2014, the couple wanted to do something meaningful in her honour. Crystal had been a dedicated hockey mom to her two boys, Michael and Adam, and Terry himself had been a member of Acadia’s varsity men’s hockey team in the 1960s. Michael (’17, ’18) joined the hockey program in 2013. The Hennigars set up the Crystal Hennigar Memorial Award in 2014 for the hockey program and funded it for five years.

Today, they have created bequests in their wills to fund two awards in perpetuity. One will renew the hockey award, and an equivalent sum will fund an engineering/ geoscience award.

Crystal’s younger son, Adam, graduated with a BSc in environmental geoscience in 2018. “Adam really enjoyed the program, and the whole faculty of geoscience were wonderful,” Terry Hennigar says. “We are very proud of Michael and Adam, and we thought there should be a scholarship to support geoscience and engineering students as well as hockey players.” 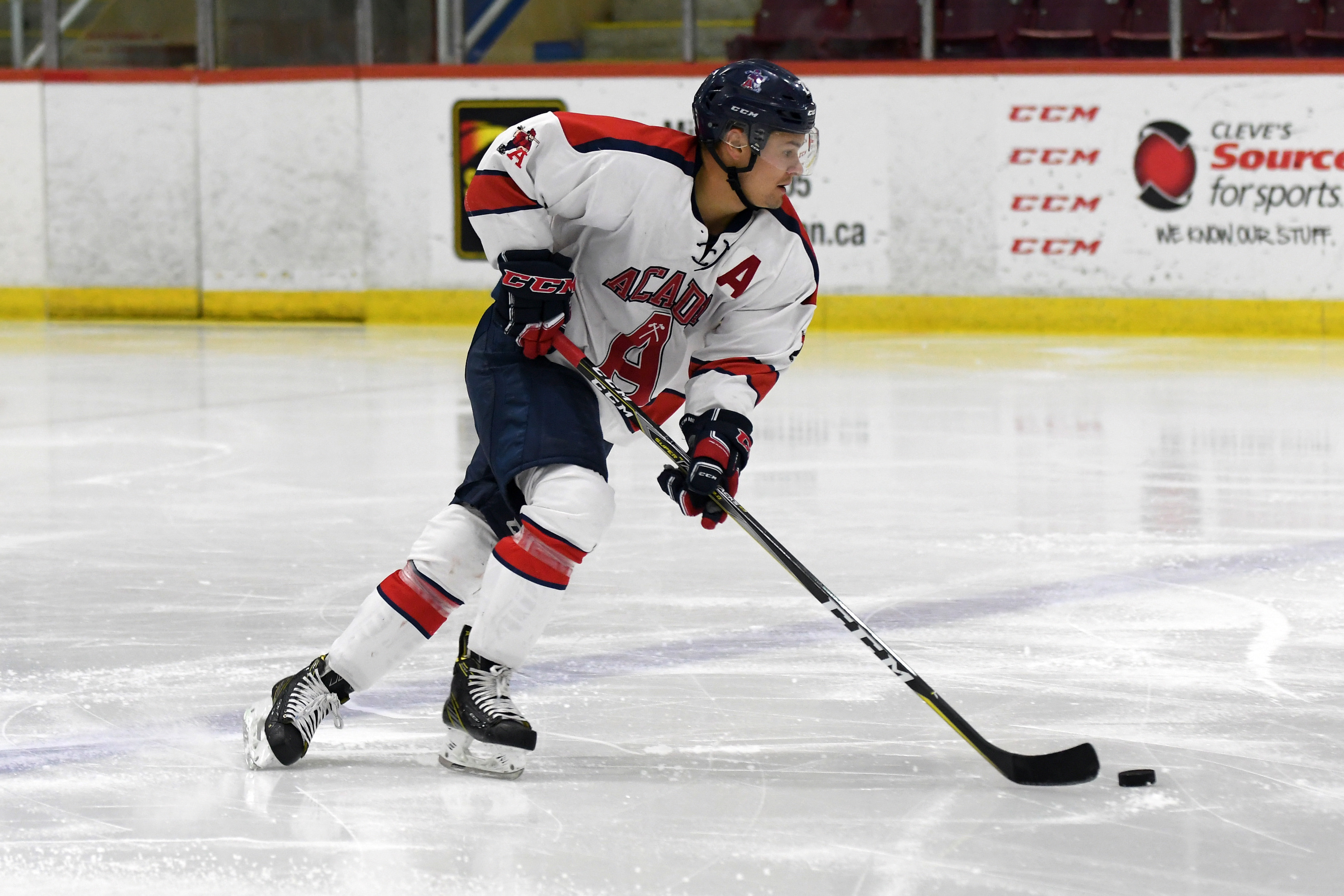 The value of a named award

Awards such as the Crystal Hennigar Memorial Award are beneficial to Acadia’s student-athletes and crucial for the hockey program, says Darren Burns ('95), head coach of the Acadia Axemen hockey team. “These awards make it possible for us to be one of the top programs in the country, because we can recruit outstanding athletes and citizens from across Canada,” he says. “A named award in memory of an individual or a family represents the values of someone who was respected. The Crystal Hennigar Award is particularly special because of Crystal’s dedication to supporting minor hockey and because her son Michael played hockey here.”

For the 2017–18 academic year, Boston Leier (’18) was the award recipient. “I played hockey with Michael, and we’re good friends,” he says. “Receiving the scholarship was a huge honour, and it’s something I will cherish.” Leier now plays professional hockey in the American Hockey League.

Terry Hennigar’s first two years at Acadia were in engineering. He left to teach for two years with Frontier College in northern Canada’s mining industry; when he returned to Acadia, he switched to the geology program.

He laughs when asked whether he had mentors at Acadia. “You want to believe it!” he says. “That’s one of the reasons I feel so strongly about supporting the University.”

During Hennigar’s second year in geology, Professor Rupert McNeill introduced a new course. “He was a visionary and a great professor,” Hennigar says. “He introduced a hydrogeology course – the study of groundwater – in 1963–64, and he needed two students to sign up for the new course. It looked interesting, and I said I’d like to take it. McNeill asked if I could find another student, and I got my right-winger on the hockey team, Phil Brown, to sign up. We were his first students, and that was the first course in hydrogeology in Atlantic Canada.”

The Province of Nova Scotia had just established a new Groundwater Section within the Department of Mines (now Department of Natural Resources). McNeill’s course led to a summer job there for Hennigar in 1964, followed by a full-time job after graduation. At the urging of his employer, he took a master’s program, graduating in 1968. Hennigar later worked for Environment Canada and several national consulting companies before starting his own business. “I give most of the credit to Rupert McNeill and the Acadia geology program,” he says.

“If everybody acknowledged what Acadia had done for them in their careers, I think they would feel a certain sense of commitment to support their alma mater,” he says. “If I hadn’t gone to Acadia, I would never have been able to do what I have done. And I thank them for that – for being patient with me, encouraging me, and opening a career for me to follow.”

Hennigar advises new graduates and young alumni to expect paradigm shifts in their careers. “When there’s a shift in thinking and an approach to problems, step up and embrace it, because that can lead to a more challenging and more successful career.” He pauses and laughs. “I often quote Yogi Berra: “When you’re going down the path of life and you come to a fork in the road, take it.’ You never know what opportunities lie ahead that will grasp your interest!”